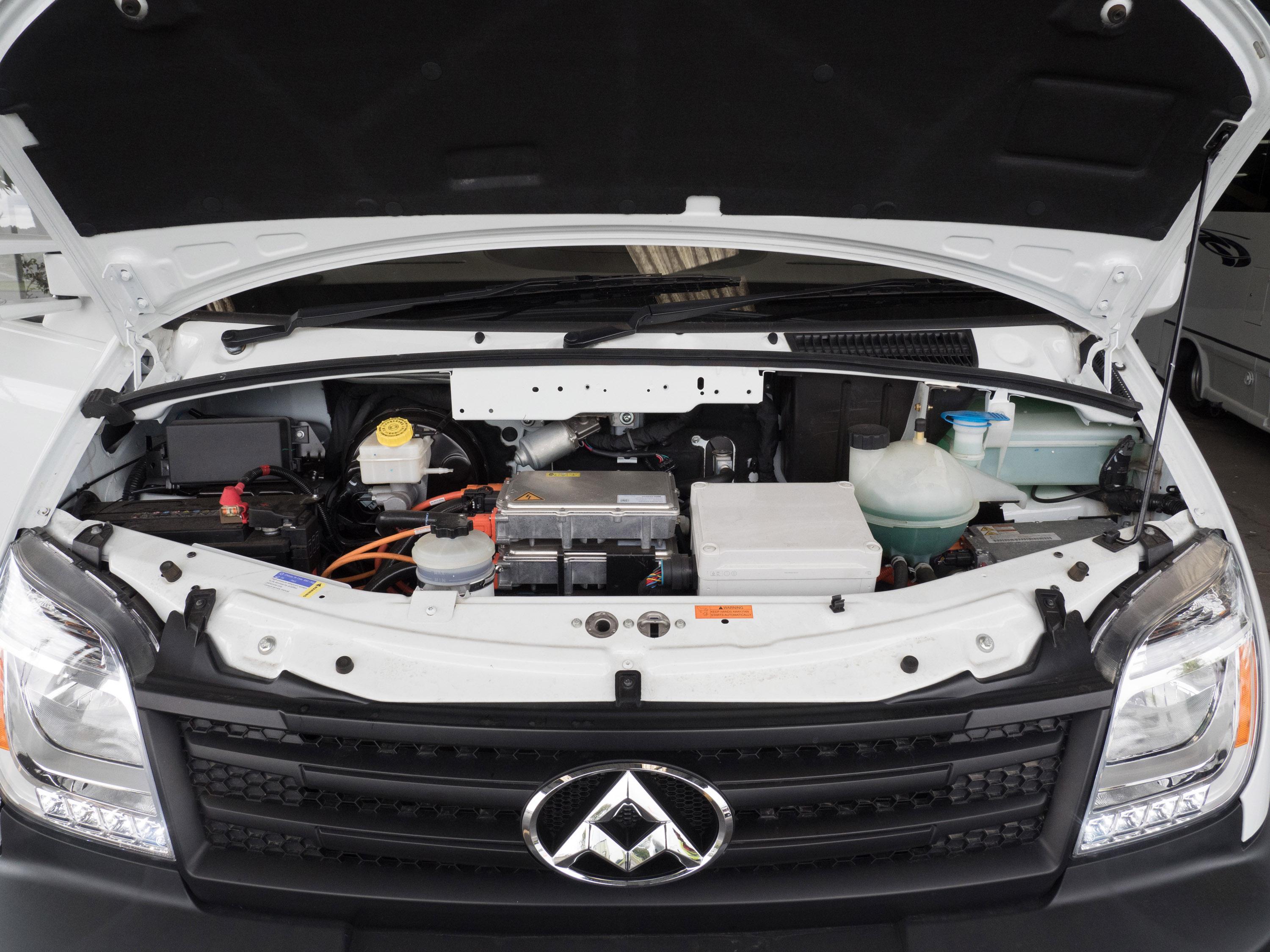 Plug in and play

Electric cars aren’t exactly common in Australia but there have been some serious developments overseas. Indeed, there are some well known vehicle manufacturers which have at least one model on their books. Tesla is certainly a name that comes to mind but the likes of General Motors, Nissan, Volkswagen, Land Rover and Renault all have their fingers in the pie.

In the RV world, things are a little different of course and there are some serious engineering, financial and logistics issues that will need to be overcome before we see a battery-powered Toyota LandCruiser towing a caravan in Australia.

However, there are one or two battery-powered motorhomes around. Many of us have seen photos of the German-built Dethleffs motorhome that is covered in solar panels, but there’s been an interesting development much closer to home.

Not quite in Australia though, just across the ditch. I was in Auckland at a show very recently and front and centre on the thl-owned RV Super Centre stand was a Britz eVolve two-berth motorhome which is entirely battery-powered.

It’s a coach-built design, based on an LDV EV80 cab chassis. In case you are not familiar with LDV, it’s now fully owned by a Chinese company but was once known as Leyland DAF Vehicles. Britz has some experience with the LDV cab chassis, the 2.5L turbodiesel-powered version at least, as that’s what its Discovery motorhome is based on in New Zealand. Here in Australia, it has Mercedes-Benz Sprinter underpinnings.

Britz didn’t have to do any work with the mechanical components of the battery-powered motorhome as LDV sell its EV 80 cab chassis complete with a 100kW/320Nm permanent magnet synchronous motor and a 56kWh lithium iron phosphate battery system. That is teamed up to a six-speed auto gearbox.

It comes with all the expected safety features including ABS disc brakes all round and drive and passenger airbags.

Under the bonnet, things look a bit different to a conventional engine but there are still fluid levels to be checked, if nothing else. In the bumper bar grill there are some giant clues that something is different about this vehicle. Here are located three different sockets that can be used for charging up the vehicle battery — there’s a power lead in the vehicle for that purpose.

With an external length of just 5.82m (19ft 1in), the eVolve is a relatively small motorhome and it’s built very much in the Britz/Maui/KEA style with fibreglass composite panels and tinted glass windows all around the rear with just the lower half of both the side windows having an opening. Definitely an NZ trait.

Interestingly, the door in the eVolve is much more the European style with a non-opening top half window.

Something that made me smile was the small tunnel boot across the rear. Some years ago that was a feature of just about all NZ-built rental motorhomes and was good for fishing rods and snow skis alike!

Something else that amused me when I stepped into the eVolve motorhome was that it has what I call an ‘NZ back’. That is, a U-shaped lounge with all-round windows. This is something that was almost obligatory in any NZ-built motorhome for many years, simply because it gave commanding views of the surrounding scenery which, of course, NZ has in spades.

Layouts have changed but in many ways this is one that is very hard to beat, particularly as the offside seat has a 45-degree C backrest (against the kitchen bench) which is just great for admiring the aforementioned scenery.

Of course, the U-shaped lounge is also the dining area (there is a removeable pole-mounted table) as well as the motorhome bed. It measures 2.1m x 1.45m (6ft 11in x 4ft 9in) and has to be made up every night. This is one of the reasons the NZ back sort of fell out of favour.

Along the offside wall, the kitchen bench is surprisingly large, even with the 45-degree seat back carved out of it. A little surprise in this motorhome is that there are no gas appliances. The cooktop is a Philips 100W-2100W induction unit, the fridge is

an Isotherm CR85 12V compressor job and the microwave oven, as always, is powered via 240V mains (operated at powered sites only).

Inside the shower cubicle, things look a bit familiar. It’s a combo ‘wet’ setup, so there’s a Thetford cassette toilet, a flexible hose shower and a small corner washbasin. It’s all very compact.

Apart from the fridge, the only appliances that use 12V are the water pump and the LED lighting. The only other item on board that uses significant energy is the water heater and that too is 240V-powered.

I have to say I was a bit surprised by the lack of an LG gas system. I get the idea of an all-electric vehicle but it is something of a limiter of any sort if you plan to do any sort of freedom camping.

Behind the steering wheel, the LDV looks for the most part like a conventional vehicle. LDV has a centre-mounted dashboard for all its vehicles, so the gauges are in the middle. In this case, we get a speedo, slightly irritatingly with km/h and miles/h figures, the latter being on the outside and in larger figures, a battery percentage gauge, kW used gauge and a distance remaining gauge. Note that because driving conditions can vary, the battery percentage gauge is going to be more reliable than the distance remaining.

If you are used to the Mercedes/Fiat Iveco sophistication that comes out of Europe, then the LDV will seem slightly agricultural, but the basics are all there and commanding it is really just like driving a normal light commercial vehicle.

Starting the vehicle is a matter of turning the ignition key, putting the auto in Drive and then simply driving off. The handbrake is a switch on the dashboard. Acceleration isn’t neck snapping, indeed not good for battery economy but the eVolve does keep up with the general traffic flow without too much trouble.

Going downhill was slightly odd. The vehicle has some sort of regenerating system, judging by the kW gauge, but on long runs downhill it was like I touched the brake lightly every now and again. Still, it was particularly interesting to watch the kW gauge do its thing!

The oddest part is the total lack of engine noise, making general conversation at a normal tone quite easy. Unfortunately, it also means that all the squeaks and rattles that a motorhome can produce are quite obvious. Fortunately, the eVolve I had didn’t produce too many of those and the most annoying of all, the grill rattle (normally sorted with a tea-towel), was completely absent.

Undoubtedly the weak point of the eVolve is the driving range, which is about 120km and does necessitate a planned itinerary. To quote the Britz information, “smooth and cruisy” driving is recommended.

Britz NZ does have several planned trips and apps, such as PlugShare which can be used to map out journeys. It’s not such a problem in New Zealand given the much shorter distances than n Australia and that the necessary infrastructure for electric vehicles seems to be more advanced than that which has been introduced here.

Oddly enough, it did strike me that the eVolve may well suit the way I often used motorhomes in NZ. I frequently visit either Auckland or Christchurch for work reasons and do little more than motor around the urban areas in a motorhome, which I use like a mobile office with accommodation.

I noted earlier that there are several sockets at the front of the eVolve and that means several charging options. 50KW DC Fast Charging stations are located in a variety of places in NZ — some are pay-as-you-go and some are free! By stopping at these, it will take between five and 45 minutes to get the batteries to an 80 per cent charge and can be regarded as a between-destinations charge. A full charge takes about 1.5 hours.

AC Fast Charging is a medium speed charging option and can be found at certain holiday parks in the form of an EV-friendly site. They should be reserved in advance to ensure you can power up. This system does allow a faster top-up charge than a normal power outlet at a caravan park.

The conventional power outlet takes longer because the power is shared with the rest of the ‘house’ facilities. AC charging can take up to nine hours, so think overnight in reality.

To say the least, this is a big and brave step by THL/Britz but it’s also an innovative one as well. There are limitations on the concept for sure but I reckon I could put together a neat little tour out of Auckland or Queenstown without too much trouble at all.

Indeed the Queenstown tour recommended by Britz includes getting as far away as Dunedin and Mt Cook, which isn’t bad going at all.

You can even buy an ex rental if you like, all yours for NZ$130,000 from the RV Super Centre. For a test run and a holiday in New Zealand, then book a plane flight and see what the future of motorhoming might be all about!