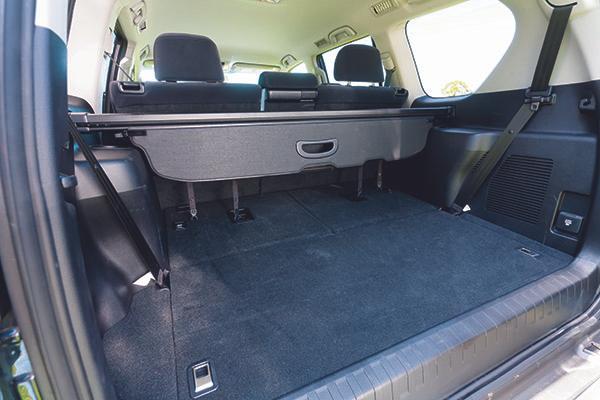 The Prado is one of the very few large 4WD seven-seater wagons remaining that did not start out as a ute. Of the others, the Land Rover Discovery 4 has gone upmarket and the Mitsubishi Pajero is getting long in the tooth and no replacement is forthcoming. The Prado is the only relatively modern mainstream 4WD large wagon and the market loves it – it’s the top-selling model in the large (dual-range transmission) category. So with the introduction of a new 2.8L engine, does the Prado still make a good tow tug? That’s what we’re here to find out…

The new, variable nozzle turbocharger with intercooler has high-flow vanes, a high-response actuator, a more rigid and efficient impeller, and a full-back turbine wheel, which all nets better efficiency. The new turbo is 30 per cent more compact and gives approximately 50 per cent faster response.

Toyota wanted to produce a quieter and smoother turbodiesel with its 1GD-FTV, particularly when idling. Toyota used a low friction timing chain rather than a belt and also used a counterbalance shaft and improved turbo mount rigidity. Intake ports, exhaust gas recirculation port and intake manifold were shaped to suppress intake variation and the associated combustion noise, and the exhaust manifold has been designed to increase the thermal retention of the catalytic converter. Adding an oil pan insulation cover and a new resin engine cover has also reduced noise.

The results were worth the effort – on test, the Prado’s engine was quiet and smooth for a turbodiesel. You still get the diesel clatter going on, but it’s almost like it’s coming from the car alongside you in traffic. A big improvement on the previous 3L engine and, in fact, the engine is also quieter than the identical engine in the HiLux and Fortuner.

While there would be something wrong with a turbodiesel if it didn’t have strong torque in the 2000 to 2500rpm range – the 2.8L has plenty here – the surprise is what happens at lower revs. Turbodiesels have what’s called turbo lag; that is, the sluggish interval between putting your foot down and the engine responding at low engine rpm, often due to the engine not producing enough exhaust gases at low revs to get the turbocharger spinning quickly enough to supply strong boost.

This used to be really bad on some turbodiesels, where it felt as though the engine was frantically putting more coals on the fire to build up steam, and was very sluggish in the meantime. This delayed throttle response, or lag, simply didn’t exist on the Prado. If you needed to get a gap in the traffic, the Prado responded instantly with a seamless and assertive throttle response. Most unlike a turbodiesel. At the other end of the scale, the engine was reluctant to rev past 3800rpm – it’s redline is at 4400rpm. Luckily, all its power goodness has already happened by then so it really doesn’t need the extra revs on board.

The six-speed auto got through the gears smoothly enough, and the full-time 4WD system gave good grip even on slippery surfaces, rarely engaging traction control.

The Prado is one of the smoothest-riding 4WD wagons on the market. While it did fidget a little on patchy road surfaces, it absorbed the worst of the road’s pockmarks really well.

Steering is very light and doesn’t have much feel, although it is direct. The Prado’s chassis is not the 4WD-world’s most dynamic; it preferred lashings of understeer when pushed, and the Grandtreks were not the most grippy original equipment tyres, either. So forget tackling corners in any sort of hurry. As an open-road tourer, though, there are few more comfortable 4WD wagons than the Prado.

The Prado achieved 9.1L/100km when travelling the majority of the time on B-roads and freeways without a caravan behind. When towing, fuel consumption climbed to 15.9L/100km. The Prado’s 150L fuel capacity is a bonus, taking away range anxiety when touring in remote areas.

We towed a 1932kg Tare caravan behind the Prado with a 185kg towball download. The greatest disappointment with the Prado is not so much how it tows, but rather its lack of towing capacity. With the raft of utes and ute-based SUVs now able to pull 3000kg or more behind them, the Prado’s 2500kg seems a little light-on.

Stability was not obviously affected by adding a caravan behind; the Prado did not yaw and we only got a pitching movement going on some undulating roads. The standard side mirrors are large enough that, with some vans, you may be able to see behind them without towing mirrors. For those that need towing mirrors, the Prado’s mirror shape is well suited.

The full test appears in Caravan World #551 May 2016. Subscribe today for the latest caravan reviews and news every month!