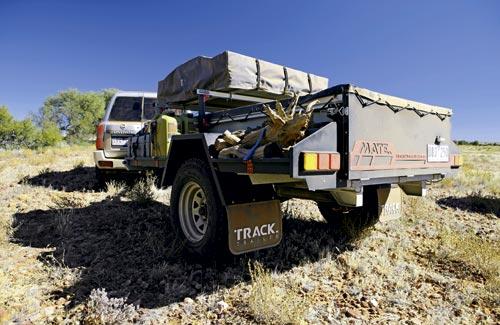 Now, it looks like Track has done it again with its niche-filling Mate - a well-engineered, rugged platform based on the Tvan's military-grade underpinnings - that you can tailor to your work or play, depending on the equipment you add.

It all looks so good on paper. Specify your Track Trailer Mate in one of the four packaged configurations - Base, Weekend, Tour, or Trade - currently developed by Track Trailer, create your own from an extensive option list, or wait until third-party suppliers start to plug in to the opportunity and start offering alternatives.

But isn't $14,300 a hefty starting price to pay for what on the surface looks like a (rather well-made) 8ft x 4ft box trailer with a tonneau cover, four outrigger trays for jerry cans, and space cases? Not if it's a Base Mate like the one we hauled, heavily laden, for a monster 5000km trip from Melbourne, across the Simpson Desert, down the Birdsville Track and home.

In the camper industry, you pay for engineering, and it's what's under the Mate's galvanised steel body panels, with their stone-resistant stipple powder-coat finish, that makes all the difference.

If you doubt this system can make a difference, check out the video on Track Trailer's website (www.tracktrailer.com.au) that shows a Tvan following a 4WD on a test track. While the vehicle's rear end is doing a frenetic dance, the Tvan behind it stays in constant touch. So unless you have a state-of-the-art coil-sprung tow tug ahead of your Mate, it's a fair bet the trailer and its contents will have an easier time than you do going over the worst bumps and corrugations.

A COUPLE OF MATES

Track Trailer supplied two Mates for our trip across the Simpson Desert, retracing the steps of the first vehicle crossing in 1962. We hauled a Base Mate behind a latest-model Simpson 50th Anniversary Edition Nissan Patrol ST 3L diesel. The trailer's standard equipment included a rear-folding tailgate, a substantial swing-up jockey wheel, large mudflaps, and a state of the art DO35 offroad coupling rated for 3.5t and incorporating a solid mechanical handbrake.

The other Mate on the trip was configured as a Weekend unit that, along with its slim and stylish (but costly at $4200) Rhino Rack-mounted James Baroud pop-top solid roof camper, pump-action 70L water tank, fold-out gourmet kitchen and deep-cycle battery electricity supply, was also equipped with a full-width slide-out tub drawer ($1320) and a Foxwing 270° fold-out awning ($799), bringing its total to $26,182.

You can also go crazy with the option list and order a Mate with the works, including a full fold-out soft-floor tent with additional rooms and an awning, and probably get up to a $40,000 price tag - the cost of a base model Tvan Yulara - but that's still well short of what you can pay for a comprehensively-equipped conventional camper from many other manufacturers.

But the beauty of the Mate is its modular design, which means it can be configured to suit both workday and weekend roles, with equipment removed, swapped and fitted to suit your needs.

Our Base Mate's role on the trip was as a gear carrier, which meant the 2250x1600mm (7ft 4in x 5ft 3in) load bed beneath the vehicle's standard tonneau cover was largely occupied by a bank of four 105Ah deep-cycle batteries powering three 40L fridge/freezers. These were secured to the Mate's universal rails, with most of the space in between occupied by a row of jerry cans.

Also adding to the load were four additional jerry cans and two space cases, all strapped to the exterior load trays. And when you added a further 200-300kg from the firewood we scavenged on the way to the desert, we were nudging the Mate's generous 1500kg GVM by the time we hit the sand, but the Patrol's 3L common-rail turbodiesel handling it with aplomb.

Successfully handling the Simpson's increasingly steep and sandy dunes as you cross from west to east (as most people do) involves a combination of serious speed and momentum, and seeing the punishment administered to both tow vehicle and trailer as they bounced in and out of large wheel spin-induced holes looked very frightening indeed.

But following the Weekend Mate for long stretches and watching its 250mm suspension, generous 30° departure angle and highly articulated DO35 hitch hard at work was always impressive, particularly since we were largely oblivious to the Base Mate we were towing.

Perhaps the greatest testament to the track-levelling quality of the Base Mate's MC2 suspension was that a bundle of firewood gathered on the side of the highway, and held in place by a white shoelace from an abandoned pair of runners, stayed in place across this tough desert track.

While it was there to work, the Base Mate also served as very comfortable overnight accommodation in the desert. The trailer featured an ARB Kakadu rooftop tent mounted to a pair of study Rhino Racks above and to the front of the trailer bed. Designed with warmer climates in mind, the tent is a compact, flip-over hard-floor unit with a built-in queen mattress, and weighs about 65kg.

The tent was quick to erect once we unzipped its heavy-duty UV-stabilised PVC cover. Full marks have to go to ARB for supplying a generously-sized (and mostly dust-proof) cover that doesn't ruin your fingers (or patience) when you zip up on a chilly morning.

Access to the bed is easy via the fold-out ladder that also forms the support for the flip-over base section, while awnings held away from the large flyscreen-fitted windows keep rain (and sun) from the interior.

Sleeping 1500mm (4ft 11in) off the ground also had its advantages when we crossed the Simpson, when ground temperatures dropped to -4°C. Raised living also kept us well clear of a plague of hungry rats.

With the re-enactment crossing over, we headed home to Melbourne via the shortest route, which was along the notorious Birdsville Track.

In spite of the Mate's best efforts, it sustained some shot-peening paint damage to exposed frontal areas. Despite the measures already described, I believe the Mate's optional drawbar-mounted jerry can holders, with their angled steel stone deflector panels, would have limited this damage.

Other than that, nothing broke, fell off or was damaged on either Mate after our test across the Simpson. Because Mates come with confidence-inspiring warranties of five-years for the chassis and suspension, and three-year for the body, you're sure to see plenty circulating around Australia for a long time to come, and in a wide range of configurations.

Any Mate can also be optioned with a stainless steel kitchen ($1760), which swings out to the passenger side of the trailer, making it easily accessible for quick roadside stops.

The modular kitchen is fitted with quick-snap connectors for water and gas, and is completely removable, so you can keep it stored while you use the trailer for other duties in between trips. The quick-connectors also mean you don't have plumbing running into the storage area, so this space doesn't have to be vented, which can lead to dust ingress. The kitchen also comes with height-adjustable integrated legs which are stowed below the unit when travelling.

Like the Tvan's slide-out unit, the Mate's kitchen uses a Swift two-burner cooktop, which is supplied with a non-stick grill plate. In addition, the sink is completely removable, so you can empty the water wherever you want to - and not on your feet. Other features include a cutlery drawer that fits a standard insert to keep things organised.

I WOULD HAVE LIKED