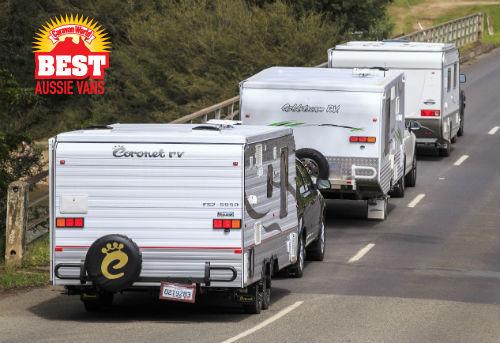 Lightweight, low-profile, easy-to-tow: these words are synonymous with pop-top caravans. No longer seen as the ‘budget’ little brothers of the caravan world, pop-tops are now an important sector of the market in their own right. While you may have to make compromises on space and things such as bathrooms, they can have an internal height, length, and feature list equal to that of a full-height caravan while their lower travel height means reduced wind-drag and improved fuel economy.

Melbourne-based Coronet has completely overhauled its range. In fact, the FS2 pop-top we tested for BAV was its first public outing, so fresh is the new design. It’s clear that the new-look Coronets have been brought into the 21st century.

When it comes to solid, well-built vans, Goldstream RV builds some of the best on the block. Its 16ft FKST – newly decorated with CNC-cut furniture – came to BAV fitted with the so-called Aussie Adventure Pack, an optional upgrade to suit the rough and tumble of outback touring.

The Jurgens Jindabyne PT2210 is a new-for-2013 pop-top with plenty of class and credibility for Aussie touring. Although the manufacturer has South African origins, Jurgens vans that are sold locally are designed here, and in our view are sufficiently Australian to qualify for Best Caravans test.