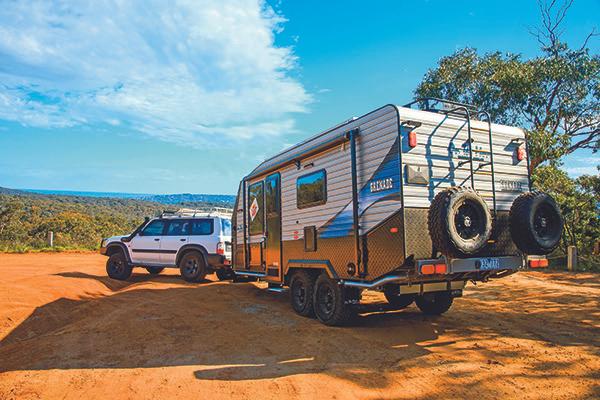 What could be better than backing the 4WD up to the van’s coupling, lowering the jockey wheel and knowing that the next couple of months would be filled with open highways, cold beer by the campfire, and not a worry in the world?

The tyre pressures are correct. The 4WD has been serviced. The van is ready to roll. As you do your final walk around your rig, knowing that your equipment won’t let you down as you take the Mereenie Loop Road or the Tanami shortcut to the Kimberley is about as satisfying as it gets.

Ultimately, it’s about matching the rig to the job. And that’s where a van such as the On the Move Grenade Series II comes in.

The Grenade is at the upper end of On the Move’s range, a sort of miniaturised version of its No Limits offroader. The Grenade remains, however, a substantial van in its own right, and the fact it is shorter and lighter than its bigger brother is, in our view, a distinct advantage for offroad touring.

The steps allow the bed to sit slightly higher than in most caravans, resulting in a deeper storage area beneath – which is welcome, considering space here is encroached upon by the sizeable tunnel boot. Reading lights, large windows and a skylight above the bed completes the picture in the bedroom.

There’s a large checkerplate toolbox on the drawbar that opens either side on gas struts. The nearside tap is well protected, and there’s even a big LED light bar on the front that’s switched to the tow vehicle’s high beams. The Grenade uses the Hitchmaster DO35 coupling – well-regarded unit.

I particularly liked the van’s storage compartments. There’s a boot directly behind the drawbar-mounted toolbox measuring about 510mm high and 400m deep. Below this boot is another boot, accessible by angled doors either side of the van. The doors themselves are behind a mesh stoneguard, so overall there’s a lot of protection for the front of the van, though the dual 9kg gas cylinders are exposed.

Now, as if that wasn’t enough storage, there’s even a tunnel boot behind it all. The tunnel, however, contains a nearside slide-out barbecue. This barbecue, by the way, isn’t your standard fare: it even has a small built-in sink and chook rotisserie!

A word of caution: just because this van has acres of storage space up front doesn’t mean you should fill it with the heaviest stuff you can find. The van’s unladen ball weight is already 241kg, and while it tows nicely, it’s important to be conscious of your vehicle’s maximum towball download. So load carefully.

There are so many clever components to this van that it’s hard not to like it. Loaded with bling and substance, it is an absolute cracker. There is simply nothing that this van does not have for its size and weight – perhaps a sauna and spa? That’s how comprehensive the creature comforts are – you do not feel as though you are missing out on anything.

It has a smart layout with the right fixtures and fittings, and even a shoe compartment on each side of the bed.

This van has such a comprehensive, all-encompassing level of gear it is quite amazing. Certainly at this price you expect a load of luxuries, but the Grenade surprises with equipment you just don’t get at this price.

I would have liked…

The full test appears in Caravan World #534, February 2015. Subscribe today for the latest caravan reviews and news every month!