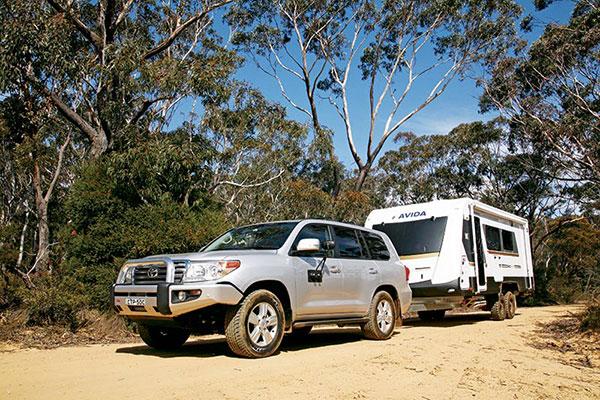 Like a number of specialist caravan manufacturers, Avida has built its hot-dipped galvanised chassis in-house. RHS 150mm (6in) is used for the main rails and RHS 100mm (4in) for the drawbar rails. However, there are considerably less cross members than the usual. That’s been done specifically to cut down on weight. Instead, a one-piece 49mm sandwich panel floor with protective aluminium lining on the underside is used to beef up the strength.

Two 120L water tanks are mounted fore and aft of the tandem axles, with the spare wheel fitted between the chassis rails at the rear. Although, in this van, the wheel mount is bolted to the chassis, future versions will have a wind-down mechanism, which isn’t a bad idea, given how heavy wheels can be. One other point of interest for this particular 50th anniversary model is the gold painted suspension cradle, quite visible given the road height of the van.

Similar to the floor, both the walls (33mm) and roof (45mm) are one piece and are also made using sandwich panel construction with no frame. The idea is to retain strength without a weight penalty. The shape of the front of the van is a deviation from earlier models and the roof is much less sloped, which has made quite a difference inside. The front moulded fibreglass looks pretty swish and comes with a front boot that has an aircraft-style door and a nicely recessed stoneguard for the front window, giving the van a streamlined appearance.

To keep things neat, the gas cylinders are not mounted on the drawbar rails but are, instead, in a dedicated bin at the front nearside. Even allowing for the gas bin, the front boot is one of the largest I have seen – there’s plenty of space for just about everything you could want to carry, despite the Truma water heater that’s also housed in the boot.

Inside the 6.98m (22ft 11in) Topaz, I was interested to see that Avida has resisted the temptation to opt for the standard front island bed/rear bathroom layout that is so popular these days. Instead, given the long slide-out, which slides just over 600mm (2ft), the kitchen sits across the front of the van, with sideways-facing lounges (with a table) on either side in the forward mid area, an east-west bed with its head in the slide-out and a full-width rear bathroom.

The full test appears in Caravan World #543 October 2015. Subscribe today for the latest caravan reviews and news every month!