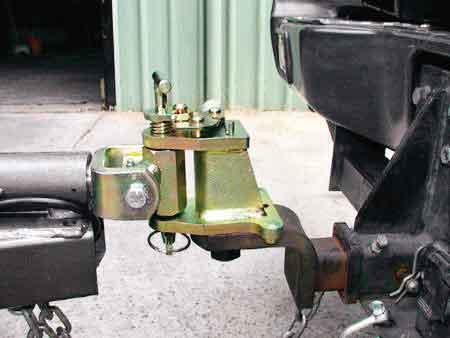 GUIDE TO HITCHING UP A CARAVAN

More often than not, hitching appears to be a simple procedure, but there are a few

tricks to know. Important items to tick off your to-do list before heading out include having the right towbar and caravan coupling for the job; understanding the legalities of a tow coupling; and knowing the accessory items every coupling needs, including a jockey wheel, brake and lighting connection, chains and shackles, and a park brake.

ELEMENTS OF HITCHING UP A CARAVAN

Check the plate or sticker attached to the towbar to see if it is rated to tow the weight of your van when fully loaded (the ATM). If it can tow a smaller weight than the car is rated for, the lower weight is the one that applies. Note that simply having a towbar on your vehicle does not necessarily make it the right one for your caravan. Many cars and 4WDs are available with a variety of towbars and ratings. Many cars are also optioned from new with a towbar rated only for light towing, often because the owner’s requirement was simply to tow a lightweight box trailer.

The towball itself will also be load-rated – it should be rated to 3.5 tonnes which is stamped on the head of the ball. There are two common designs of towbars: the ball hitch and the receiver hitch. The ball hitch is a one-piece unit with a flat tongue that is usually bolted to the towbar frame; a receiver-type hitch has a flat tongue to which the ball is bolted, while the rest of the piece is a box section that fits into a receiver on the towbar frame. A pin and ring secure the towbar tongue to the receiver through holes pre-drilled in the hitch and receiver. In most states it is a legal requirement to remove the tongue from the towbar frame when the towbar is not in use.

The receiver hitch towbar is most commonly a heavy-duty towbar and will have the maximum rating for that vehicle. It is also the more versatile bar in that it more easily accommodates particular hitch requirements. For example, it is suitable when fitting a load-leveller hitch, or a fitting to suit a 360º offroad-style coupling, often found on camper trailers and off-bitumen caravans.

The off-road trailer coupling is often secured to the towball attachment by a T-shaped spring pin. The ball-type coupling has a lift-up release handle that can be locked in the release position so that the coupling can be fitted loose to the towball. This release handle must then be lowered to the locked position, so that the coupling clamps around the ball and cannot come off. While the clamping mechanism may be adjustable, it's best left to a caravan expert .On the drawbar, the caravan coupling is available in two main varieties – a ball type which, as the name suggests, is designed to fit over a towball. The other is a high-articulation (off-road) coupling, usually fitted to offroad vans or camper trailers, which requires a unique attachment to be bolted on the towbar tongue in place of the towball.

The off-road coupling is used in place of the more traditional ball type by those who require greater angles, typically for offroad travel. Unlike the traditional ball coupling, the polyblock type allows far more horizontal and rotational articulation at the coupling than the ball type, which can break the neck or towbar if its (minimal) horizontal or rotational axis is reached. The polyblock type gives better vibration dampening, too, which is important when driving on rough, corrugated roads.

Other coupling arrangements suitable for corrugated roads include the AT35 by Vehicle Components, which has a double locking mechanism. It has an articulated coupling, which allows for a lot of angular movement, and is ADR-approved to 3.5 tonnes. Another one is the Al-Ko AKS 3004, rated to 2.5 tonnes, which has four inbuilt friction pads. A Bartlett cone and ring couplings run to more than 30 tonnes.

The safety chains attached to the drawbar are the last-resort safety measure if a caravan slips off the towball when travelling, so it would be certain disaster if the D shackles locating the chains also failed.

The way around this is to check that the shackles are stamped with a load rating to cope with shock loadings (and the safety chain, for that matter).

Wiring for trailer lights and electric brakes (where fitted) need to be matched to the plug on the tow vehicle. If the connectors do not match between vehicle and trailer, an adaptor can be used.

All trailers greater than two tonnes must be installed with breakaway braking units. The braking mechanism causes the trailer to gently halt should it unhitch from the tow vehicle.