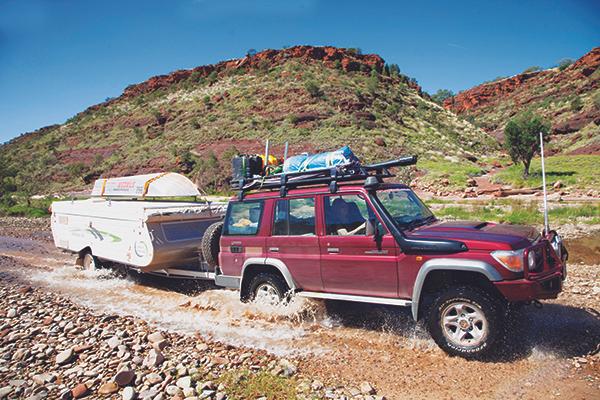 How important are RV aerodynamics?

When you’re towing a bluff, full-size caravan around, aerodynamics seems to be the least of your worries. With the drag of an extra set of wheels or two to pull along and, of course, the extra weight involved, it would appear that high fuel consumption goes with the territory for us caravanners.

Yet nothing could be further from the truth. Knowing about basic aerodynamics and how they affect your rig is really important, not only for fuel consumption, but also for wear on your tow tug, and the stability and safety of the rig as a whole.

The history of aerodynamics

Automotive engineers became interested in aerodynamics and their effect on vehicles in the early-to-mid 1900s, as cars became a regular feature in society and their ability to travel at speed increased. Engineers began work on the most efficient shape for a car body, which was found to be a teardrop shape. An early example of such a car is the 1921 Rumpler Tropfen-Auto, with a low aerodynamic coefficient of drag (Cd) figure of .27, as good as the better cars of today.

The teardrop shape didn’t exactly take off, so the cars through the ages that have been commercially accepted are also a more conventional shape. Such cars include the 1935 Chrysler Airflow and 1955 Citroen ID/DS series.

Later on, detail improvements became important in incremental aerodynamic gains: the flush side window fittings and integral roof drip rails of the 1982 Audi 100 and, more recently, the more common fitment of underbody belly pans (although streamlined undercarriages have been seen before in cars such as the Citroen ID/DS), active radiator blinds (to reduce engine compartment airflow when not needed) and thinner tyres to help reduce aerodynamic drag.

Caravans are nowhere near as streamlined as cars – or even 4WDs – and, while there are more caravans with composite construction methods that, to a degree, allow a reduced frontal area with its aerodynamic benefits, for the better part, a 40-degree-or-so sloped, squared-off (in sectional view) front end is the current nod to aerodynamics of any caravan.

Even if a caravan cannot be turned into a streamlined teardrop shape, much could be done to improve its aerodynamic detail. Protrusions such as lights, aerials, air-conditioners and awnings all add to drag. Studies by car manufacturers have shown that adding windscreen wipers to a streamlined car will increase its drag by 10 per cent.

When a vehicle drives along, it pushes air out of the way at the front and leaves negative air pressure – a turbulent wake – behind it as the air is trying to fill the ‘space’ left by the vehicle. The more air that is pushed out of the way up front, the more rushes in to replace it behind.

You notice this most when driving near large trucks on the freeway – most caravanners would have felt the sensation of a truck passing, ‘pushing’ at you when the front passes and then ‘pulling’ at the vehicle or van as the back of the truck passes.

As fuel use and efficiency becomes more of a concern in the future, caravan manufacturers may be forced to invest in wind-tunnel testing and new construction techniques to ensure a more slippery, rounded shape, and employ more testing to refine detail wind-cheating measures, such as underbody cladding and flush-finish windows, side marker lights and awnings.

Yet the above study suggests that improvements in other sources of drag, such as rolling resistance, may yield a more significant, practical improvement in fuel consumption for the engineering investment than changes in aerodynamics.

Aerodynamics come into play when a vehicle is driven at speed – drag forces increase with the square of the velocity, but it is only when a vehicle’s speed rises above around 70km/h that engineers have noted that wind resistance takes over from rolling resistance as the most significant contribution to fuel consumption increase. This, of course, assumes that we’re just talking about a tow vehicle – the added weight of a caravan behind will always be a major factor in increased tow vehicle fuel consumption.

So what can be done on a practical level to improve your tow tug’s fuel consumption when you’re touring?

First, there are some things that won’t help much. We discovered some years ago in our fuel consumption test comparison between different van sizes, that fuel economy (with a 2.5L Sorento turbodiesel as the tow tug) does not improve much when towing a pop-top van weighing 900kg over a full-size tandem weighing 2200kg.

Towing with a diesel-engined vehicle will often improve fuel consumption – or rather, the fuel consumption increase over driving solo will not be as marked as it will with a petrol-powered vehicle. You may see up to a 50 per cent increase with a diesel vehicle, while a petrol vehicle will increase by 80 per cent or more. These are, of course, generalisations – there will always be exceptions to the rule – but it’s no secret that diesels make more efficient tow tugs than petrols.

So what can you do right now to save fuel and avoid the negative consequences of poor aerodynamics when towing?

As you tour around, you may notice large trucks fitted with a wind deflector between the cab and trailer on a semi-trailer or between the cab and tall load platform on a rigid truck. Truck operators don’t do this to make the truck look pretty – it’s all about efficiency gains to save on fuel and, thus, operating costs.

Just as wind deflectors work well on trucks, they can also be beneficial on vehicle and caravan combinations.

The wind deflector – typically a large sheet of rigid plastic or fibreglass mounted on the towing vehicle’s roof or, more commonly, attached to a roof rack to deflect air away from the caravan – can save quite a bit of fuel.

The best results are on wagons, where the wind deflector can be mounted well back on the vehicle’s roof, as close as possible to the van and is an appropriate shape (that is, a slight v-shape) and is angled properly (around 40-45 degrees from horizontal).

We’ve done tests with both a Mitsubishi Pajero turbodiesel and a Jeep Cherokee 4.0L petrol and a fuel saving of up to 3.0L/100km is possible. In the Jeep’s case, not only was there a distinct improvement in fuel economy, but in head winds the amount of throttle pressure required to tow a full-size 17ft tandem van was much less than without the wind deflector fitted.

The only downside of having a wind deflector is that when you unhitch at your destination and drive into town you’ll get the oddest of looks from passers-by.

The full feature appeared in Caravan World #538 June 2015. Subscribe today for the latest caravan reviews and news every month!