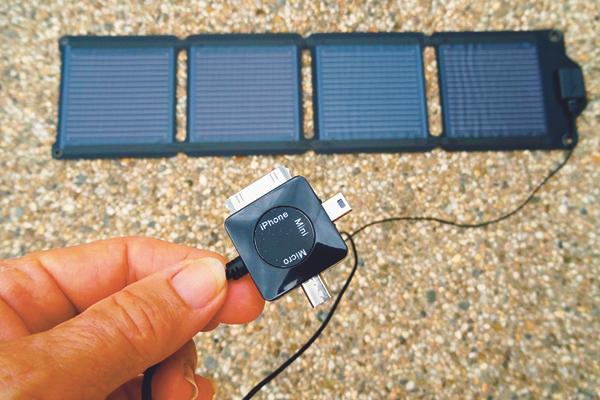 The EnerPlex Kickr IV solar charger (RRP $189.95) has a series of four pliable solar panels which fold to 185x225x15mm for storage, and measures 775x185x2mm when in for use. It weighs only 315g including the charging cable. There are incorporated grommets which allow it to be attached to any convenient gear using the supplied elastic bands.

These panels are made in the US and have a one-year warranty. They use award-winning CIGS technology (where a thin layer of copper, indium, gallium and selenide is deposited on a pliable plastic backing) giving a high absorptive coefficient (strongly absorbs sunlight) and a very thin panel. In fact, these panels are claimed to have the highest power generation to weight ratio in the world.

The Kickr IV solar charger puts out up to 1.2A of regulated current at 5V via the USB cable, meaning that under ideal conditions, you can charge your phone or camera at the same rate as your usual charger in a 240V socket. The USB charging cable has three commonly used plugs, including the one for iPhones, and it is stated in the manual that the Kickr IV can charge an iPhone 5 in two hours of direct sun.

The user manual cautions against immersion in water, particularly the USB connection, and bending/creasing the panels. It also advises against trying to concentrate sunlight on the panels, for example, with a magnifying glass.

There is also an Apple product warning: if direct sunlight on the panels is interrupted during charging, a time-out will result in an incompatibility message appearing on the Apple product. Simply unplugging and then replugging will allow charging to continue.

With the sun directly overhead, we placed the solar panels on dry concrete and plugged in our Sony Cybershot 60V camera with a half-charged battery. The charging light on the camera illuminated immediately and the battery was fully-charged within an hour – the sort of time it would have taken with its own 240V charger. This means it is practical to recharge the camera (or GPS or phone) while on a lunch break on a day trip or on a long bush walk with the panels attached to a back pack.

We found the USB plug a little awkward to use as it is very close to the plastic frame, but it’s probably fine for those with younger, more nimble fingers. Otherwise, this product is very user-friendly, light and compact. The ability to charge electronic gear without starting the generator is a great advantage for those in the caravanning community who like to camp offroad, and is certainly much more pleasant for their neighbours.