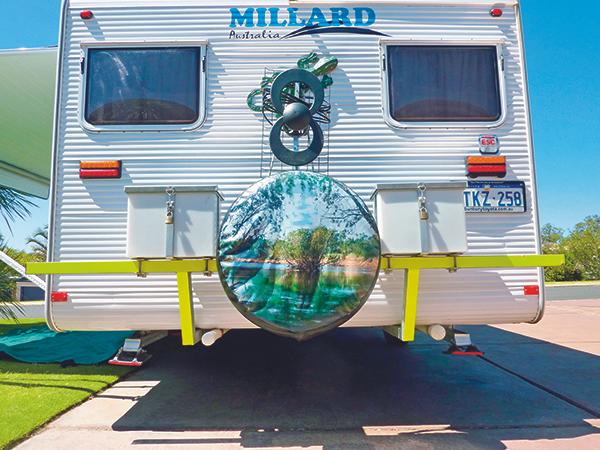 The Burges’ current van is not their first. They had a couple of vans when their children were young but had stopped travelling as John’s career took up ever more of their time and it was only with approaching retirement that, in 2010, they bought their current caravan.

The van is a Millard 18ft Sunseeker single-axle pop-top. John said it’s been a great van and manages well behind their Toyota Kluger. They chose not to have an ensuite, as they don’t free-camp. The rationale was simple: why tow the extra weight and lose inside space for something they wouldn’t be using as they always stay at caravan parks?

Besides the ESC, John also fitted a caravan mover, which he thinks is another great piece of gear as it’s got them out of tight corners on a few occasions, especially after having had a back operation; no more pushing, pulling and generating entertainment for park residents.

“The rear-view camera we fitted is also very worthwhile as I can see exactly what is behind me at all times,” he added. “I have upgraded all my fluoro lighting, reading lamps, door entry and awning lights to LEDs just by replacing the globes. They give much better lighting.”

John and Cath’s van modifications are a result of their experiences on the road, and there are many such improvements.

For example, there are six stainless steel saddles under the side of the van to permit the ground mat to be hooked up off the ground using spring hooks. This not only acts as a draft skirt under the van but stops the Burges’ dogs from finding their way underneath, especially when they are parked on a dirt site. “Our dogs are white and we do like to try and keep them that way,” John said.

John also made up a door step from checkerplate aluminium and it travels inside on the door step. He was unable to find one that fitted properly so decided to invest the time in making one that does.

John and Cath also found that things stored in the van’s slide-out pantry shelves had a tendency to fall out so John made two clear polycarbonate inserts to fit into the side of the shelves. This works well and now nothing strays from its place.

As the Burges’ always travel with their dogs and they are always on a lead outside the van, John fitted a saddle between the door stop and the wheel, using a spring clip so it’s quick to secure them.

“There are lots of uses for stainless steel saddles and spring clips,” he said.

Another is on each of the awning posts, as attachment points for a removable clothes line. Higher up on the outer face of each awning post John fitted another saddle and clips the awning tie-down ropes to it using spring hooks. It’s very simple but effective.

At the rear is a Happy Wanderer TV antenna on an aluminium pipe bolted on the rear bar behind the spare wheel. John made a PVC cover to protect it when not in use. On either side of the spare wheel, he mounted two jerry can holders into which he fitted polycarb inserts of his own making for carrying two 10L jerry cans. Each is fitted with an aluminium lockable lid keeping everything neat, tidy, clean and secure. Two 20L cans can also be carried with the lids open.

John also installed high-vis tape on the outer face of the rear bar as a very effective safety feature for better visibility in day or night but he also finds it handy if you can’t find your caravan after going to the amenities in the park at night: “Done that a couple of times,” he admitted. “The tape lights up distinctively when you flash your torch on it.” There are also similar strips of tape on either side of the drawbar.

Tired of carrying wooden plates for under the stabilisers, John made 12mm thick polycarb feet to bolt onto the stabilisers and no longer has trouble with the feet sinking into soft ground.

He fitted PVC pipes with caps on either side of the van near the rear back supports. The right-hand one is 50mm diameter and 6m long to carry two 6m drain hoses and, on the left side, is a 2m length of 40mm pipe in which he carries two sets of annexe bars for securing the awning end privacy screens.

One of the ‘poke-you-in-the-eye’ features of the Burges’ van is the tow hitch, which is painted bright red. This makes it easy to see when reversing to hitch up, especially if in the shade. It shows up well on the car’s reversing camera. John also painted the inside ring under the latch silver so he can tell at a glance if all is secured properly. The silver stands out clearly if you haven’t latched down on the ball. John admits to doing it a couple of times before he painted it; never since.

“Also, I think we’ve all driven off at one time or another with the jockey wheel on,” he said. “Well, not since I’ve painted the top of mine bright red. It really stands out against the silver steel.”

John also fitted mesh behind the gas bottles where he carries a length of garden hose for washing the car and van. “It used to annoy me storing the rubber clip-together floor mats in the front boot when they were wet and muddy so I made up a storage area under the van at the rear of the wheel arch, on a flat aluminium frame with a swing-out aluminium angle ‘gate’ at the van side. Now I hose them off and they drip dry while in storage. No more wet and dirty front boot.”

Since leaving the army 50 years ago John’s been storing his duffle bag knowing that one day he’d find a use for it. Well, he’s found it. It’s great for storing the power cords and hoses. There are 5m and 15m cords, along with two 10m drinking water hoses, each coupled together on itself to keep out dirt, and an inline water filter.

“We never connect water to our van without this filter except at home,” John advises. “We’ve hooked up to some dodgy water in some of the parks and found that the filter is good insurance. The black accessary bag has spare hose fittings in it, a spray nozzle for washing the vehicles and a two-tap fitting for when there is a shortage of park taps.”

“We bought two privacy screen ends for our pop-top awning but found that at times the sun or rain came in through the gap between the awning top bar and the awning roof,” John says.

“It also allowed the rain to come inside the van as the gap was over our door. So I bought two full-size van ends and found them to be much better. Securing them was a pain though, so I bought a length of annexe railing and cut it in 2m lengths for ease of storage, and mount the railings to the annexe bars using reusable cable ties.

“The privacy screen ends slide into the annex railing like sail tracking. It works a treat and is quick and easy. It saved us on many unpleasant hot and wet days.”

The full feature appeared in Caravan World #536 April 2015. Subscribe today for the latest caravan reviews and news every month!