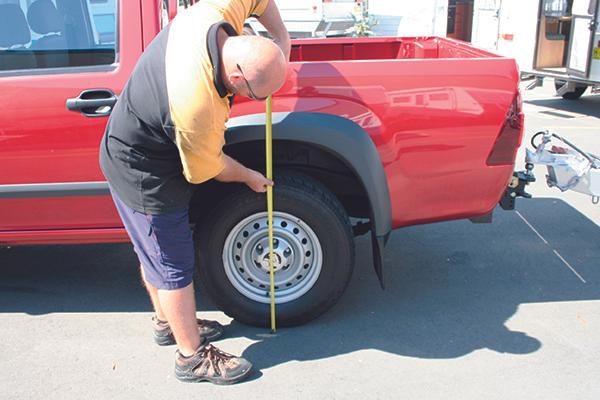 A safe towball download weight has always been considered to be in the range of 10-15 per cent. Despite this ‘rule’ originating from a different era of caravans (the 1970s), the 10-15 per cent rule has persisted.

While this ‘rule’ is commonplace, it is not enshrined in law. The only legalities relating to towball download concerns the maximum allowable towball mass (TBM) as stated by the vehicle manufacturer or towbar manufacturer, whichever is the lower TBM (it’s rare these days for the two to differ, but it’s worth checking).

What has been interesting is the change by caravan manufacturers to include TBM at Tare on compliance plates. This has highlighted the relatively low weight many caravans impose on the tow vehicle – at Tare weight, at least. So, for example, a 2000kg Tare caravan might only impose 150kg on the ball. That’s about 7.5 per cent of Tare on the ball. And some vans have even less TBM than that – closer to six per cent.

Low TBM has long been a feature of vans built in the UK or Europe. Their caravan markets are dictated by the need to have low TBM to suit the prevalent lightweight tow vehicles, with many vans having a TBM of 4-5 per cent of Tare mass. These vans, without exception, use a friction coupling to mitigate sway, which is more likely with such a light percentage of weight imposed on the towball.

Towing many Aussie vans with 6-8 per cent TBM for towing tests or reviews, we’ve found that most tow perfectly. The vehicle sits flat, there is no hint of trailer sway or vehicle yawing, even after thousands of kilometres of towing on a variety of road surfaces and conditions.

What is a game-changer, of course, is what happens when the caravan is loaded. Fill the front boot with gear, load up the water tanks (typically mounted ahead of the axles) and you can have a much higher weight on the towball. Instead of guessing what the TBM is with a payload, you should always verify it by weighing with a TBM scale or at a public weighbridge.

With a much higher ball load than at Tare, you might find the dynamics of the rig have changed significantly. While proper payload balance is vital, this may still not avoid a high ball load situation. A weight distribution hitch (WDH) may be in order.

A WDH is a great invention to help distribute weight in a vehicle and trailer setup. While they can be of great benefit, it is worth investigating whether they are right for you and, if so, to understand the basics of a proper setup.

WDHs are simply two spring bars attached to each side of the trailer A-frame at one end and the tow hitch at the other. In the most popular design, there is a couple of brackets to secure the bars to the A-frame, chain links attached to the bars to adjust tension and a special towbar hitch with holes to attach the end of the bars to the vehicle. So long as you have a towbar of the hitch-receiver design that is strong enough to be used with a WDH (some are not), all you need is the WDH tow hitch and bar kit.

It follows that the weight of the rig is spread more evenly over the wheel sets and will restore steering response, assist braking control, level-out ride height and generally improve stability. As a bonus, it can also add lateral friction to the coupling to reduce sway, although WDHs are not intended for this function, as such.

When driving with a WDH, there is not much you need to do, provided you adhere to the manufacturer’s instructions. That includes releasing tension from the spring bars when entering driveways or traversing spoon drains. Not many people do. Stopping in the kerbside lane of a three-lane highway, hopping out to release the spring bars, then driving over the driveway into a petrol station, is easier said than done.

Many vehicle manufacturers specify that a WDH must be used when towing, usually when TBM exceeds a certain weight (although some, like Holden, tackle it from another perspective, saying that load levellers must be used when the trailer weight is 750kg or more).

However, in some cases, where such prescriptions don’t apply, WDHs may not always be necessary; if the TBM is not high and a manufacturer does not specify their use, then perhaps you can do without. There is the argument that maintaining steering control on the front wheels and stability generally doesn’t actually require the extreme mechanical loads exerted by WDHs until ball mass is very high (around 200kg).

The anti-WDH argument says that, provided the vehicle ride height is not excessively nose-up, that up to a point, it doesn’t matter about the download mass exerted on the towball. Because the TBM is acting like leverage on the furthermost point of the vehicle, the influence on the front wheel set is minimal up to a point. The argument is that you need a significant amount of download on the towball to cause enough lift to affect the steering. If the vehicle’s body doesn’t droop more than 20mm at the rear or rise more than 20mm at the front, the suggestion is that a WDH is not necessary.

Ride height can be restored if required with a self-levelling suspension, such as standard air springs or helper air springs, such as Polyairs.

There are some situations where a WDH should not be used – if the vehicle manufacturer stipulates that they are not used (or, like Land Rover, say they cannot recommend them) or if a light TBM van, such as a European caravan, is being towed.

In any case, before buying a new vehicle or van you should know what the manufacturer’s recommendations are in respect of WDHs.

A WDH is no substitute for good weight balance either. If you are overloaded or incorrectly loaded, then a WDH is not going to magically cure the situation. But if you are facing a vehicle that points to the sky and have a van with a high ball load, then there is some relief at hand by way of a WDH.

There are a few different varieties of WDHs, but the most common is the angled-shank ball head and thick spring bars typified with the Hayman Reese units. For light-duty applications (up to 110kg weight transfer) there is also the ‘shepherd’s crook’ type.

Any WDH will need adequate A-frame length so the clamps can be fitted to the A-frame and the chains secured. Also, an inboard or centre-mount jockey wheel makes fitting the spring bars much easier. An outboard jockey wheel is not a deal breaker, but it can require some deft moves to remove or refit the jockey wheel to the clamp.

The Hayman Reese type is available in heavy-duty versions of single and twin bars per side.

When you’ve fitted the height-adjustable load-leveller tow hitch tongue and coupled up the caravan, you need to check the height adjustment is correct for the vehicle and van. Decouple and adjust as required, then, before you hitch-up the van again, measure the distance from the top of the wheel arch to the ground (assuming you have parked on a smooth, level surface). Once hitched-up again, measure how much body drop you have at the rear and how much the front has risen. Ideally, you need to adjust the tension of the leveller bars to restore ride height to less than 20mm drop from original ride height.

Make sure you read all the instructions carefully before you fit the bars. Keep in mind that the bars store enormous tension and if they release too quickly they could do you some serious damage. Do not leave your feet or any other part of your body underneath the bar setup. Try not to release or tension the bars unless the vehicle is on a level with the van and in a straight line, as the spring tension may be much greater.

The full feature appeared in Caravan World #545 December 2015. Subscribe today for the latest caravan reviews and news every month!