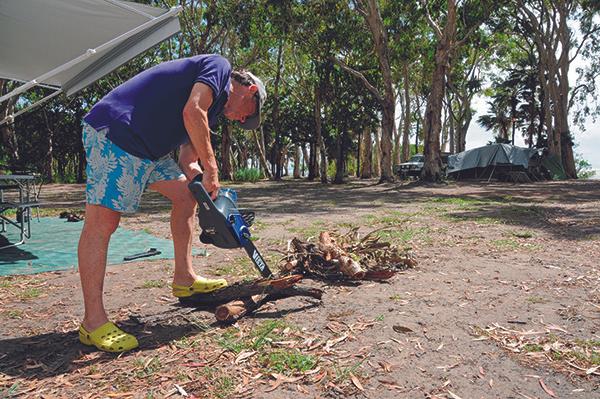 Not everyone in an idyllic bush camp likes the hills alive with the sound of chainsaws, but there’s no quicker way to cut up enough wood for a decent campfire. Not only is the noise of a chainsaw annoying but so is carrying a separate can of petrol to run one when you are otherwise diesel-dependent, like many remote area travellers.

The quiet, elegant and powerful solution is a cordless electric chainsaw and Victa’s new lithium ion 40V models are the most powerful of this new wave of rechargeable and more environmentally-friendly appliances.

The chainsaw is one of a raft of a new range of cordless, powered garden equipment recently released by Victa. Others include two lawn mowers, a trimmer, a blower/vacuum and a hedge trimmer, all using the same powerful 40V/4Ah lithium ion battery.

What makes the Victa chainsaw particularly appealing to campers and caravanners is that you can store it in the boot of your tow car, or even under the bed of your caravan, safe in the knowledge that there are no petrol fumes.

MORE POWER TO YOU

And, if you have memories of some early, weak cordless products, you can consign them to the past, as these latest lithium ion products really are a new breed.

The Victa 40V not only charges quickly via an inverter from your car or caravan’s batteries, but also impressively holds its charge. We were able to cut enough timber for several big evening campfires before removing the 4Ah battery and replenishing it via its dedicated battery charging dock.

With its 1.5kW 40cc two-stroke engine and built-in clutch, it’s also as powerful as a similar-sized petrol-power chainsaw and somewhat lighter at just 4.5kg, including the battery.

The Victa’s low kickback 420mm (16in) bar and chain VCE1640 model is large enough for anything you should put on a campfire and makes it easy to gather firewood on the way to a bush site. Simply pull it out when you see dead wood at the side of the road, cut it to transportable size and then trim it to length once you get your campfire going.

Chain tension adjustment is super easy and there is a very effective safety lockout that requires you to have two triggers depressed to activate the chain, in addition to its standard chain brake. Chain oil is required for bar and chain lubrication, just like a regular chainsaw.

If you’d like more power, there’s the bigger 18in bar and 1.8kW 45cc VCS1845 model weighing 5.7kg but you don’t really need the extra size, power or weight for camping.

At $499 RRP, the Victa 40V chainsaw is very competitively priced, not only against less powerful rechargeable electric chainsaws, but also on a feature-for-feature basis against petrol-powered models.