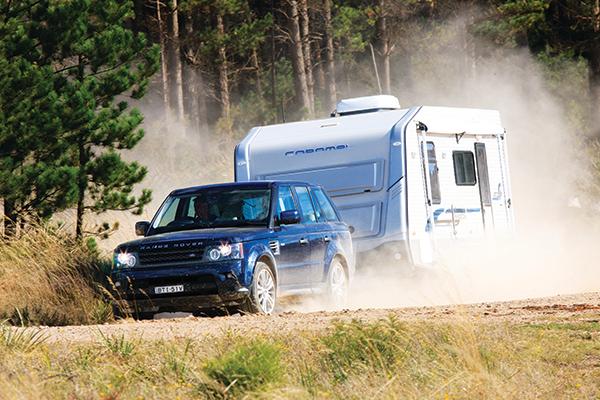 Any tow vehicle you have will be compromised in some way. You can’t expect that the heavy hauling truck you’ve bought to tow your 3000kg van is going to be a cinch to park in a multi-level carpark when refreshing supplies on tour. Conversely, that neat, old car that you know and love might not be up to the job of towing your new van, even if the towing capacity numbers look right.

Bear in mind that there are so many towing vehicles and even more caravans that there will always be exceptions to the rule. While certain popular combinations are a straightforward proposition, many combinations are not. So what are the things to look for in a good tow vehicle?

The first thing is to be realistic about maximum towing capacity. Don’t try to account for that capacity to the last kilo. Also, you need to account for your caravan’s payload – there’s no point buying a 1800kg Tare tandem-axle van with a 400kg load capacity and then hitching it up to a vehicle that has a 2000kg towing capacity. You’ll be packing the van very lightly, once the water tanks and gas bottles are filled.

There’s really no such thing as towing-capacity overkill, though. While a large caravan may only be 2500kg fully loaded, you can buy 4WDs that have a 3500kg maximum capacity. Don’t think that the surplus 1500kg is a waste – the higher the mass you can haul, the better, generally speaking. The vehicle will usually have more power in reserve and inherent stability to make a more relaxed towing platform than something a bit more light-on.

Try to buy a vehicle that has at least 10 per cent of maximum towing capacity as the towball mass (TBM) download capacity – don’t assume that the 10 per cent rule applies. Many manufacturers, such as Mitsubishi and Toyota, do state clearly that TBM is 10 per cent of towing capacity. But some manufacturers have a very low TBM download capacity – much less than 10 per cent – often because a towbar can’t be engineered to handle a decent download, or the chassis is not up to the job. Either way, always find out what the TBM is and whether that limit is realistic for the van you propose to tow.

Be aware, too, that TBM in many cases is counted as vehicle payload, and also a proportion of the rear axle load. These have to be factored in to your calculations of weights.

The same rule applies to maximum tyre load – the weight is expressed in kilos on the tyre sidewall. It is rare with factory original equipment tyres, but it pays to check that the tyre’s share of the load is not beyond its capability (especially with a secondhand vehicle).

Speaking of towing platforms, generally speaking, the vehicle will tow better if it is heavier than the caravan it is towing (and indeed is a legal requirement in some circumstances). While many vehicles are perfectly legal towing a trailer weighing more than their GVM, don’t assume you can buy and load up the heaviest, biggest caravan you can find and that the vehicle will tow like it was built to do it.

Never forget the biggest restriction on what you can tow is not the vehicle’s tow limit itself, but its towbar. Towbar capacity can sometimes be rated lower than the vehicle’s maximum towing capacity, especially some low-volume European imports (that are hardly mainstream and that have quite a low tow capacity, in any case).

Always check the towbar is up to the job. It should have a plate or sticker attached specifying the maximum capacity, and some manufacturers, like Holden, also generally affix a sticker to the driver’s door jamb specifying the towbar capacity.

Like everything to do with caravanning, it pays to carefully read the fine print when it comes to towing capacity. For example, the Mercedes-Benz GL-Class has a 3402kg braked towing maximum – just about as good as any heavy-duty 4WD – but the towball download maximum is just 272kg.

Reading the fine print also applies to weight distribution hitches. Some vehicles require their use (Holden Commodore and Ford Falcon) and others don’t recommend their use (Land Rover).

What if you own a classic that you wish to tow with? An older vehicle, built before 1998, may not have a manufacturer-specified towing capacity. If so, the maximum permitted towing capacity is 1.5 times the vehicle’s kerb weight. Even more difficult is getting a maximum towball download figure you can rely on for such a vehicle. Taking 10 per cent is probably the best you can do.

Older vehicles can be hit by age-related problems and can be more susceptible to overheating or having other problems that towing will highlight. But the main issue is that cars, in particular, were only designed to tow the lighter vans available back then, so you can’t necessarily take the ‘1.5 times’ rule as a safe bet for older vehicles.

For example, a 1980-1984 WB Holden Statesman has a towing capacity of 1800kg – even though its kerb weight is 1709kg in Caprice trim. Also, the WB had a choice of two towbars, one a gooseneck tongue style that could only tow up to 907kg and the 1800kg hitch-receiver style. Try towing 1800kg with the lighter towbar and you’re in trouble.

Then there is the matter of ‘toughness’ of a towing vehicle. All else being equal, a separate chassis is tougher than a monocoque body. That doesn’t mean monocoque is bad – the Falcon wagon, for example, is a very good towing platform. However, for heavy hauling, a separate chassis, only found on large 4WDs these days, is the best bet.

The best towing vehicles are often the ones with a long wheelbase and wide wheel tracks, and those vehicles that feel nervous or twitchy to drive solo are only going to be more so with a van behind. If you compare these dimensions between cars you’re looking at, as a rule of thumb, the wider track, longer wheelbase vehicles will tow in a more stable fashion.

A live rear axle is usually better for load carrying than an independent suspension design, so with the towball download imposed and a loaded vehicle it makes a better fist of it. Because the live axle is tougher, there is usually a higher axle load limit than independent designs. Tyre wear is even with live axles because the wheel’s relationship to the road never changes. That is not always the case with independent suspensions that can introduce negative camber when compressed, even with load levellers to iron out ride level. There are also fewer bushings, and those there are will last longer because of the tougher nature of the suspension application.

The diesel versus petrol argument has many pros and cons. Towing a heavy caravan puts a lot of load on an engine and while a petrol engine of adequate displacement and with good torque output will happily shoulder this, it will consume a lot of fuel doing so. Generally speaking, you can count on at least 50 per cent more fuel use when towing a tandem-axle van with a six or eight-cylinder petrol engine vehicle than when travelling solo.

The modern turbodiesel engine is the best compromise for towing, typically providing that strong, mid-range torque that’s so useful when touring on the open road with a caravan. The added bonus is consumption will, generally speaking, not be as high as a petrol variant. The downside is that because turbo diesels have become so advanced, they can be more prone to expensive failures.

Whatever you choose, make sure you do your research so that you don’t get caught out with a combination that is illegal or, just as bad, terrible to tour with.

The full feature appeared in Caravan World #547 January 2016. Subscribe today for the latest caravan reviews and news every month!