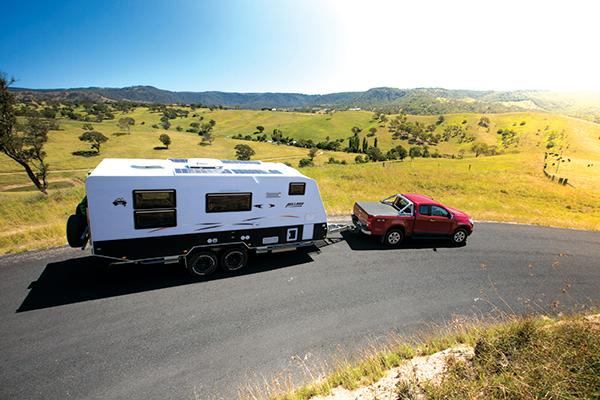 Caravan towing regulations: Do you know them all?

Driving a car on our roads requires that you know hundreds of road rules and vehicle safety requirements but, when towing a caravan, there are even more things to add to the list to keep your rig legal – some of which are quite technical. Some requirements are well-known, but others may surprise you. And it’s best not to get that surprise when you’ve been pulled over by the police or transport inspectors.

Regulations you need to know about as a caravanner are roughly divided into three areas: vehicle and trailer legislative requirements, road rules pertaining to towing, and state regulation anomalies.

There are overarching general towing compliance requirements of a federal nature, such as in the Vehicle Standards Bulletin No.1 (VSB-1) and the Australian Design Rules, and then it cascades down. First to state and territory requirements (which may, or may not, adhere to federal requirements), then to specific compliance relating to your vehicle and van, which often are prescribed as vehicle manufacturer recommendations – which, in turn, can be binding for Australian Design Rule (ADR) compliance.

So you need to be familiar with them all, and understand that when there appears to be a conflict of maximum limits, in all instances the lower limit applies. If in doubt, never assume – get it checked out with your registration authority and/or your vehicle and caravan manufacturers.

I’ll preface the weight discussion below with this: the only way to verify what your rig weighs is to go out and physically measure its weight on a public weighbridge. A recent weighbridge ticket showing that your rig is within the regulations (and shows the weights as you are driving your van, fully loaded ready to go) is your passport to touring peace of mind.

When you only have a vehicle to load up, payload is not usually too much of a concern – unless, of course, you own a 4WD that has been kitted out with a bullbar and winch, long-range fuel tank, cargo drawers and all the requisite outback touring gear. But when towing a caravan, there are weights you must know about. Some are obvious, some are not.

For very few vehicles, produced 30 or more years ago, there is no such maximum weight set out. The legislation allows for this, permitting a towing maximum weight of 1.5 times the vehicle’s kerb weight, provided the trailer is equipped with brakes. Interestingly, such vehicles can tow a trailer without brakes if that trailer does not exceed the weight of the tow vehicle.

Often the towing capacity is a standardised weight across the range, which makes it easy. For others, you need to read the fine print. For example, the new HiLux 4X4 Dual Cab has a 3500kg towing capacity. That’s great – you have a van with a 3100kg Tare and you know you have 400kg payload to play with. Except, of course, the 3500kg weight only applies to the 2.8L turbodiesel 4X4 with manual transmission. For the automatic version, towing capacity drops to 3200kg. Prefer the HiLux 4.0L petrol V6? That has a lower towing capacity again, with a 3000kg maximum.

Nissan 4WD utes and wagons, for example, all have a sliding scale of towball weight reductions according to vehicle payload. Many European vehicles have an 80kg towball download – regardless of towing capacity.

What people also often forget is that the towball mass becomes part of the vehicle’s GVM when the van is hitched. If you have loaded the back of the vehicle then added the caravan’s weight it can be easy in some instances to exceed the rear axle loading, which is then a compliance issue.

Beyond that, you need to check your towbar, towball, shackles, safety chain and coupling. Whatever the lowest rating is for all that gear is what you can legally tow. Not often do you find any such equipment rated lower than the vehicle’s towing capacity, but it can happen.

For example, there are a few 2.5t-rated towballs around. If a previous owner has fitted such a towball to a vehicle you now own, you need to change it if you’re towing more than 2.5t (assuming the rest of your towing equipment is rated to tow more than that).

Towbars are usually rated to the capacity of the vehicle, but again, there are exceptions. Both Ford and Holden offer a variety of towbars with different tow ratings, so it pays to check. All this equipment must have the maximum ratings visible, except for shackles. While they must be rated to handle the weight of the caravan, there is no requirement for them to be stamped with a load rating.

Most requirements for new caravans come under the umbrella of those for a ‘trailer’ under requirements laid out in VSB-1. Basically, this is an information document on the building of small trailers, including caravans. VSB-1 is a guideline and the ADRs are the actual legal requirements.

The towbar itself must not protrude dangerously or obscure the number plate when not hitched up. You need to keep that in mind if you have a fixed coupling fitted and, technically, a hitch-receiver towbar may need the tongue removed when not towing.

Your tyres must all be rated for the load they carry. It’s unlikely that a new rig won’t be compliant but, again, if you’re buying used, you don’t know what’s been fitted unless you check. A lower speed and/or load-rated tyre can be fitted (although not legally), even though it’s the right size.

So how fast can you tow a trailer? Firstly, you have to consult your tow vehicle’s owner’s manual. Some vehicles, such as the Subaru Outback, have an 80km/h limit when towing, while others, such as the Toyota Prado, specify a 100km/h limit. So, in theory (although perhaps unlikely), you could be booked if you go over these limits. Or if you crash and it is proven you were exceeding these manufacturer-nominated limits (even though the prevailing speed limit was higher), your insurance company may not pay up. It’s no walk in the park sometimes, this whole towing caper.

Then it comes down to specific state or territory regulations. In West Australia, it’s 100km/h. In New South Wales, if your rig (vehicle and caravan) weigh up to 4.5t combined, it’s the prevailing speed limit – up to 110km/h, where applicable. If the rig weighs more than 4.5t, the limit is 100km/h. In Tasmania, it’s 90km/h when towing. In all other states and territories, you can tow up to the prevailing posted speed limit.

There are other state and territory requirements, just to keep you on your toes.

In New South Wales, when towing on a road without street lights you have to drive at least 60m behind heavy vehicles or other vehicles towing trailers, unless overtaking. In Western Australia, out of built-up areas, you must stay 200m behind the vehicle in front if your rig is more than 7.5m long, unless overtaking.

In New South Wales, for example, where a breakaway brake system is installed (as is a requirement in all legislatures for trailers weighing more than 2t), there must be a display capable of warning the driver if the condition of the trailer battery is such that it may not be capable of activating and holding the brakes for the required 15 minutes if the trailer becomes decoupled. This applies only to NSW-registered vehicles.

Then you have general road rules that might bring you undone if you’re not aware of them. Need to cut across the end of a traffic island with your van because you can’t swing around it? According to Australian Road Rules Regulation 290, driving on a traffic island (except at a roundabout) is illegal.

Of course, everyone knows that if you are pulling away from the kerb, you must indicate for five seconds before you turn the wheel. Yes, that’s in Part 5, Section 46 and 48 of the Australian Road Rules: “If the driver is about to change direction by moving from a stationary position at the side of the road or in a median strip parking area, the driver must give the change of direction signal for at least 5 seconds before the driver changes direction.”

You certainly can’t say we don’t have enough government regulation in Australia! Yet with this information, hopefully you’ll have most bases covered to stay legal.

The full feature appeared in Caravan World #548 February 2016. Subscribe today for the latest caravan reviews and news every month!