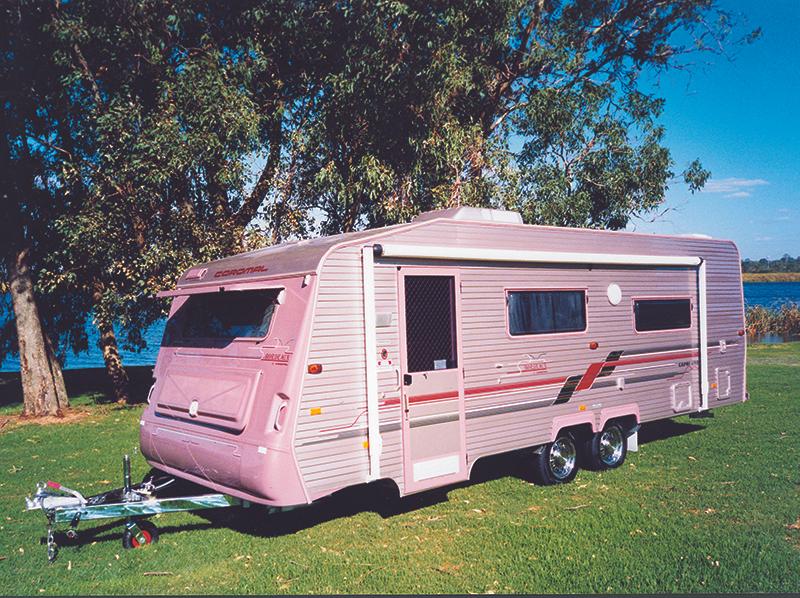 Every so often, a caravan manufacturer creates something memorable. Case in point: the Bordeaux, a one-off effort based on one of the company’s most popular layouts. Oh, and it was pink. Who said caravans were just white boxes on wheels?

As the major sponsor of the caravan industry’s 1999 national conference, Coromal pulled out all stops to mark the occasion.

The Bordeaux was unashamedly showy. Instead of Coromal’s familiar polished grey, its 6.9m (22ft 8in) body was finished in pearlescent “Champagne Pink”. Doors, window frames and body trim were a slightly deeper shade of the colour.

The interior of the Bordeaux was just as ostentatious, with new fittings and fixtures, such as round brass 12V ceiling lights, imported especially for use in this caravan. Even the light switches and powerpoints were a matching gold colour. The burgundy gas cooktop, matching oven, rangehood and sink are unlikely to be seen in any caravan nowadays, but here it seemed to work. At least, that was the consensus of the Adelaide caravan show goers who queued every day for a look inside.

The Bordeaux made its first appearance in the foyer of the Melbourne Exhibition Centre in mid-February, 1999. From there it went to the Adelaide show. We don’t know what became of this flashy specimen, but if it ever made it onto the road, we’re betting its owners were fielding questions at every caravan park.

Touted as the future of luxury caravans, the Liberty 1 was launched with much fanfare at the Qld Caravan Show in 2007. It was supposed to take top-end caravanning to the next level.

With sleek external lines, the Liberty 1 used composite moulded injection technology known as Resin Transfer Moulding (RTM) and boat-building techniques to create the structure. It was completely new for its time. It was a two-piece moulded unit, the lower half of which incorporated the chassis, with a totally moulded interior.

This, of course, over-simplifies the construction of Liberty 1. A couple of years went into the design concept, with a host of people involved and hundreds of unique components designed and manufactured for this van.

At the time, it was said that the strength of the van compared to that of offshore racing boats, with all components made from marine-grade materials.

Liberty 1 was initially made available in one size and two layouts, with more promised by the end of 2007. It had a price tag of about $100,000.

We’re not sure what became of this unique and innovative caravan but it wasn’t on the market for long.

The Roadstar Mystique was one of the company’s last manufacturing endeavours before falling victim – under different ownership to its current owner – to the GFC. If you have one, or manage to pick one up on the second-hand market, you’re in possession of one of the rarest vans of the last 10 years.

Launched in mid-2008, the Mystique has an asking price of about $108,000. Replacing the Magnifique in the line-up of ‘old Roadstar’ (i.e., before it was bought by Australian Hitec Engineering circa 2009), the Mystique had a moulded fibreglass shell, utilising a meranti timber frame front and rear, but the van’s overall structural integrity was maintained through the use of high density thermo panelling.

Inside, the Mystique had an ‘apartment’ feel, with flowing lines, modern appointments and stylish light fixtures. The timber cabinetry was top notch, with the interior generally evoking a marine feel and the thought that went into the electronics was reminiscent of the systems found on luxury yachts.

Sadly, mere months after the Mystique made its debut, hard times fell and the doors were closed. Fortunately, the Roadstar name lives on under a different owner, who continues to develop the brand and the vans that carry the Roadstar badge.

When the Linwood was launched in early-to-mid 2009, it proved a worthwhile addition to the Golf line-up, but sadly Golf – a longstanding and loved member of the caravanning community – closed shortly after. It seemed that not even this lovely van was enough to save the marque from the effects of the GFC.

The Linwood was built on a 150mm-rail DuraGal chassis with Golf’s Posi Trak independent suspension, which had airbags as a standard feature. The tandem-axle wheels had parallel bearings and 10in electric brakes, while above the chassis, the Linwood had an aluminium frame with fibreglass sheets for the side walls and moulded fibreglass for the front and rear.

Compared to previous models, the van had much smoother lines all round, including the front window stoneshield and front boot lid, which were nicely integrated in the moulding.

But with a price tag of more than $110,000, the take-up of this van was apparently low – high-end vans weren’t selling well in those uncertain economic times. The brand was given new life, however, when Avan launched a series of campers with the Golf name a couple of years later.

Future System caravans are quite rare on the second-hand market, so if you find one it could be worth snapping up.

The streamlined fibreglass appearance of the Jet Monoblocco was quite striking and because one-piece caravan designs weren’t overly prevalent at the beginning of the new millennium, when this van was launched, it caused a stir.

It seemed that in the case of this van, beauty was more than skin deep. The Jet Monoblocco was clad with a tough skin of fibreglass that was said at the time to be impervious to flying stones, etc., as well as extremes of climate. There were no joins, either.

The interior of this single-axle van was designed for balance as well as convenience, but its greatest appeal lay in its excellent finish, both inside and out.