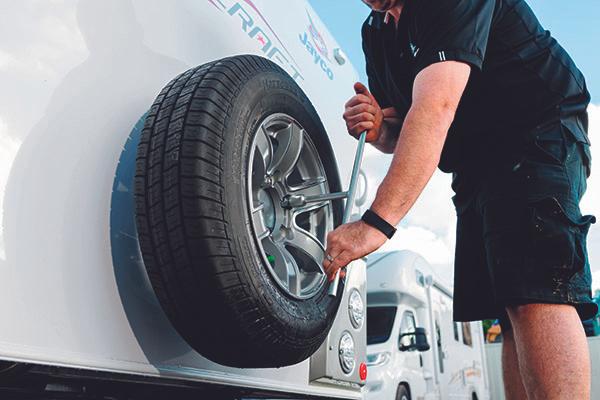 How to change a caravan tyre

There are also some things about changing a wheel on a caravan that are different to what you might be used to on a vehicle.

Before you even go on tour and discover that you’ve got a flat tyre, you need to include your spare tyre in your pre-trip checks. One thing that is easy to forget with a spare tyre – especially one that you have been lucky enough to not need to use before – is that they only last so long. Rubber hardens over time and, after five years, a tyre becomes more likely to blow out when used on the van, no matter how much tread it has remaining.

Having a spare wheel cover will help the tyre last a bit longer, as exposure to sunlight increases the rubber’s ageing process. But if I was going on an extended trip, I’d replace an unused spare tyre not long after it had reached its sixth birthday. You can find out how old the tyre is by finding its four-digit construction date on the sidewall. It’ll look something like ‘4215’, which means, in this case, that the tyre was made in the forty-second week of 2015.

The spare tyre should be inflated to the recommended pressure on the van’s compliance plate.

One final thing to check before you go is that your van is equipped with a jack and wheel brace. You might’ve only recently bought the van and never thought to check, or you’ve taken it out and forgotten to replace it. Many older vans don’t seem to have a jack and wheel brace, so now’s the time to buy them.

It’s a good idea to also buy a couple of wheel chocks and a block of wood to take along. We’ll explain why below.

To recap, you need to check the spare tyre has enough tyre pressure and that it is within its use period. You will also need a wheel brace to suit the wheel nuts of your van, a jack that suits your van, a tyre pressure gauge, wheel chocks, a block of wood, a warning triangle and a high-vis vest.

When you discover you have a tyre puncture, park the van on ground that’s as level and firm as possible. If it’s a slow air leak that you’ve discovered during a break or at camp, you’ve usually got time to find good, safe, level ground to change the wheel. The other possibility is you discover the tyre has deflated while you’re driving – and let’s face it, you’re unlikely to get any warning of a caravan tyre deflating when driving, especially with a tandem-axle van, until you happen to notice smoke and chunks of rubber flying off the tyre in your side mirrors.

One way of avoiding this is to inspect the tyres at each rest stop to ensure they don’t look under-inflated. If in doubt, check the tyre pressure.

So you notice an odd swaying motion, or smoke or rubber coming off a tyre while you’re driving along. Wait until there’s a safe place to get off the road and look for somewhere level and as firm as possible – at least a couple of metres away from the road.

That’s the ideal scenario. If you discover a tyre problem outside of 50km/h zones where you cannot pull over immediately, slow down as much as you can, put on your hazard lights and drive until you can safely pull over.

The sad fact is that driver distraction can be quite prevalent on our highways and you’re taking a risk if you are out next to your van close to, or on, the road. So if you ruin a tyre by driving on it flat for a while, it is clearly worth every cent of its replacement cost if it means you are not killed trying to save it on the roadside.

If you haven’t been able to make it to a parking area or lay-by well away from the road, if possible, park the van so the back end is slightly angled out towards the road. Not so it’s sticking out on the road, of course, but enough to give you some protection and a more visible warning to other road users that your van is there.

Put on your hazard lights, put on your high-vis vest and put out the warning triangle a good 50m behind your van near the roadside.

Then remove the spare wheel and put it out near the back right-hand corner of the van (if you’re on the side of the road) as it presents another visible warning to road users and makes it more obvious what you are doing.

If the van is hitched up to the vehicle, keep it hitched and make sure your vehicle is in gear (manual) or park (auto) and that the handbrake has been activated. Being hitched up gives the van better stability and makes it less likely to move when you’re jacking it up. If it’s unhitched, put on the caravan’s handbrake. Then chock a wheel on the opposite side of the van to the wheel you’re replacing.

Loosen the wheel nuts with the wheel brace but do not remove them yet. Most newer vans, like this Jayco, have a dedicated jacking point – if the ground is soft, put the plate under the jack and jack the van up until the wheel clears the ground. Remove the wheel nuts and place them on a clean surface, such as the jacking plate or a sheet.

Then use the jack to lower the van and then tighten the wheel nuts with the wheel brace. If you have a torque wrench, nip them up to 130Nm.

Then you need to remove the wheel chocks, release the handbrake and fit the flat tyre to the spare wheel carrier. Job done!