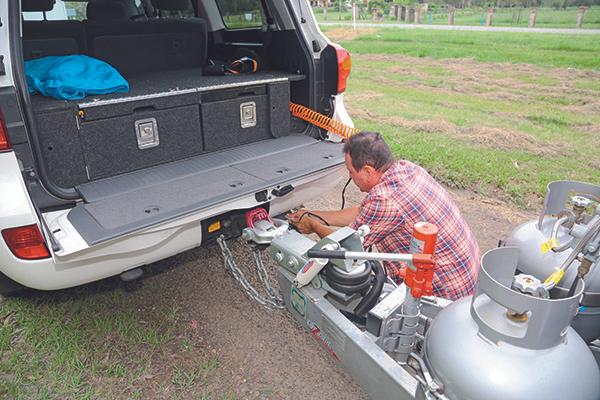 Heavier models and offroad designs have become more popular and a number of utes now have high tow ratings, despite being relatively lightweight vehicles. Ball couplings can have some limitations for these applications and, as a result, other hitch couplings have been developed.

Most people are aware of the static ball weight of a trailer but, once underway, there are also dynamic forces that can place extra stress on the tow vehicle. This is where a tow hitch like the recently developed Oz Glide comes into play.

The Oz Glide has been designed as a hitch dampening system with the aim of reducing the downward forces on the towball. Most importantly, it’s been designed to meet Australian Design Rules for 3500kg tow hitches.

The main components of the Oz Glide hitch are an Al-Ko ball coupling, airbags and two shock absorbers or, as they are more correctly known in this instance, dampeners. Instead of being bolted solidly to the drawbar rails, the Oz Glide hitch is a pivotal arrangement with the ball coupling on one side and the airbags with shock absorbers on the other.

According to Oz Glide’s Allen Stevenson, the principal role of the airbag is to absorb up and down movement between the tow vehicle and caravan. The shock absorbers are fitted to inhibit any recoil from the airbag. It looks to be a fairly simple arrangement but it involves a considerable amount of careful engineering.

On a test drive, the snatching and jerking that can often be felt when towing was considerably less obvious. This is, of course, not something that’s an issue with every caravan towing combination, but it can be a problem.

Another area I can really see a benefit is for horse float towing as, although us caravanners might tow a heavy load, it certainly doesn’t move around like a couple of horses might!

A benefit of the Oz Glide design is that it only requires a conventional tow hitch and towball and although it uses an Al-Ko ball coupling, it is still very easy to hitch up.

Where: Direct from Oz Glide