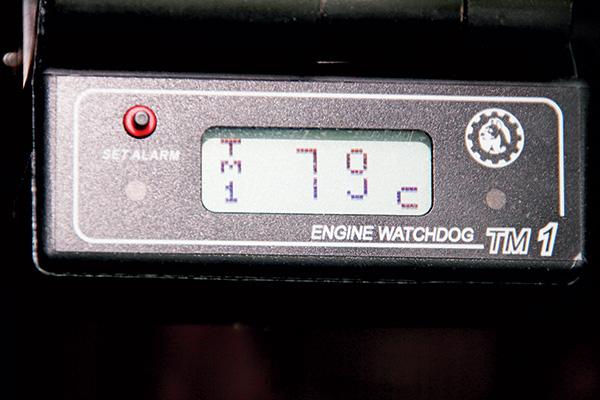 Back in 2005, we became the proud owners of our first 4WD, the notorious Toyota Hilux Surf. People in the know warned us about the weaknesses of this grey import as it had a reputation of cracking the head, which basically means the death of the engine. But we were convinced we wouldn’t become another statistic and, for seven years we beat the odds.

Until we pushed the car to its limits, while towing an offroad camper trailer, and the engine cooked in the hot weather going uphill, somewhere in southern Queensland. Such was the end of our beloved Toyota Hilux Surf.

Needless to say, hubbie Chris was determined to never let this happen again so he took preventative action. After purchasing our 2001 Toyota LandCruiser Prado, he familiarised himself with the different products on the market and decided the Engine Watchdog TM1 was the way to go.

This nifty little gadget is basically an early warning engine overheating system which could’ve saved the Surf by alarming us of the rising engine temperature before it showed on the temperature gauge – by then it was too late.

The TM1’s advanced electronic heat sensor monitors the actual metal temperature of the engine so overheating is detected before damage can occur. The sensor fits like a washer under any convenient bolt on the engine that is near the heat source where it detects the slightest changes in engine temperature. The TM1’s warning alarm sensitivity can be set to suit your individual engine and needs.

Chris installed the Engine Watchdog TM1 just before our seven-week trip to the Red Centre and set the alarm to 98°C, which is 7°C above the Prado’s normal running temperature when it’s towing.

The TM1 has a neutral white LCD screen with an automatic back light so it blends into any type of dashboard. It displays big numbers that are easy to read in either bright sunshine or at night.

Chris used the reading on the Engine Watchdog to adjust his driving while towing – as the temperature increased during steep mountain climbs, he would drop back a gear which would result in a decrease in temperature. During this change in temperature, the gauge on the dashboard didn’t move as it simply doesn’t pick up the variations. For this reason, the Engine Watchdog TM1 is an essential aftermarket gadget which can make the difference between life and death for your car, to put it in a dramatic way.

For $149, this compact engine overheating warning system is an investment which could save you having to replace an entire engine – a small price to pay. The Engine Watchdog TM1 provides peace of mind when you’re hitting the road in our harsh Australian environment. Do your car a favour and install this innovative gadget before it’s too late.

The full feature appeared in Caravan World #559. Subscribe today for the latest caravan reviews and news every month!