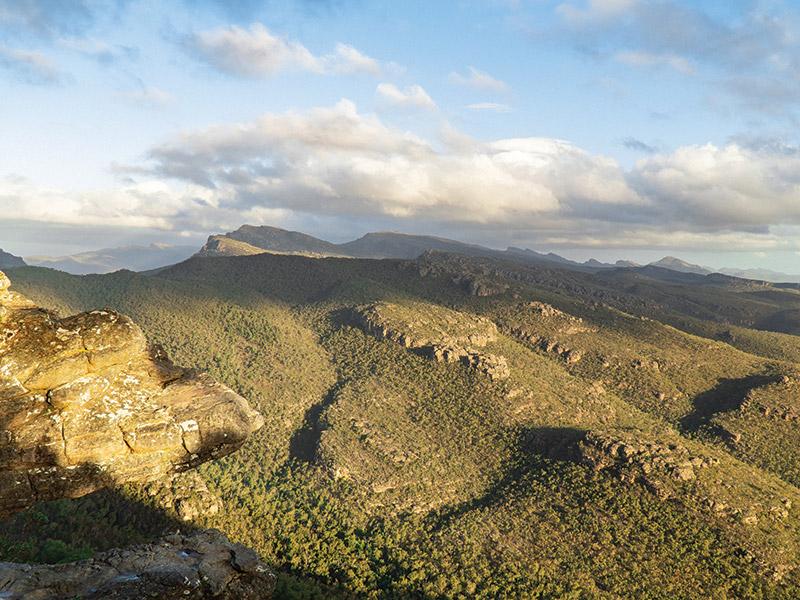 I don’t know if it’s the same for everyone, but when I catch that first glimpse of the rugged mountains that form part of the Grampians National Park, usually when travelling along the Western Freeway, where they appear suddenly, looming almost menacingly ahead of you, it never ceases to take my breath away.

There’s just something other-worldly about the Grampians, which is perhaps why it’s quickly becoming one of my favourite destinations.

I’ve had the opportunity to visit the region quite a few times recently, and this trip I was travelling with my mum Ellen, who last spent time in the national park back in the 80s, and was keen to see how much the Grampians had changed (or hadn’t!).

So with the mountains straight ahead, guiding us and our RV in the right direction, we headed for the lush and leafy town of Halls Gap, our base for the next couple of days.

Nestled at the foot of the ancient Grampians mountain ranges, the tourist village of Halls Gap is the ideal place to set up camp, regardless of whether you’re visiting to relax and unwind, or to do a bit of adventuring.

A small supermarket, post office, chemist, and petrol station offer all the standard services you would expect to see in a tourist-heavy destination, and there are also three caravan and holiday parks, a couple of backpackers, and plenty of hotels, motels, and Airbnb-style options. A variety of classic takeaway joints and cafés litter the main road, while the Halls Gap Hotel is your go-to for hearty, pub-style meals.

Add in a swimming pool, large children’s playground, visitor information centre, and an iconic ice cream parlour – best enjoyed post-hike, which my mum and I would later discover – and you’ll find Halls Gap has something to please everyone.

After refuelling at Harvest, a café/provedore that came highly recommended, and with a chilly, yet clear afternoon ahead of us (perfect conditions for reconnecting with nature!), we decided to head for the hills and see what the Grampians had in store for us.

For my mum and I, the idea of adventuring meant a few (hopefully) moderate walks to some of the key locations within the Grampians National Park. The trip wasn’t intended to be some kind of boot camp workout bonanza, but we definitely didn’t want to miss out on any amazing sights because we weren’t prepared to work up a sweat.

We figured MacKenzie Falls, one of the largest waterfalls in Victoria, would be the perfectplace to start.

Upon arrival at the MacKenzie Falls carpark, which is a 40-minute drive from Halls Gap along Mount Victory Road, we did notice a few signs warning that it was a strenuous, 30-minute (one way!) walk to the base of the falls

Undeterred, and likely energised by the delicious baked eggs and croque monsieur we’d just devoured at Harvest, we made our way down the steep, winding staircase, stopping every now and then to take pictures and gaze slack-jawed at the spectacular scenery.

At over 30-metres tall, viewing MacKenzie Falls from its base, looking up, is an incredible experience. An endless cascade of water, which, thanks to regular rainfall, makes Mackenzie Falls the only year-round flowing waterfall in the region, thunders down the rocks and causes a light mist to permanently float down around visitors. If you’re lucky, and the sun is shining in the right direction, you may even spot a rainbow glistening in the spray.

You can have a wander around at the base of the falls, and it’s also a great opportunity to regain your strength, because trust me when I say, getting back up that staircase is no easy feat.

There are rails along the entire one-kilometre path, and for good reason. They’ll be your saving grace getting back up to the top of the falls, and I’d be highly sceptical of anyone who says they don’t need them. We huffed, puffed, and panted our way to the top, now oblivious to the surrounding views, and I’ve never known a sweeter feeling than the euphoria experienced upon reaching flat ground.

Offering a gentle alternative, there’s also a walking track to the MacKenzie Falls Lookout, which is a cruisy 1.9km loop and offers a sweeping bird’s eye view of the falls. The views are equally impressive, and it’s definitely a lot easier on the body!

So was the walk worth the shaky legs and increased heart rate? You bet. And would we do it all again? Absolutely.

VIEW FROM THE TOP

Made up of five sandstone ridges, the Grampians can lay claim to some of the best vistas in the state. At any of the multiple lookouts within the park, you’re pretty much guaranteed panoramic views across undulating valleys, open plains, volcanic rock formations, and rugged, woody terrain.

From the lookouts we visited, my mum and I had two clear favourites: Boroka Lookout and Reeds Lookout/The Balconies.

Boroka Lookout is one of the most popular viewing sites in the region, and for good reason. A short stroll from the carpark, which is just 15km from Halls Gap, opens up to reveal a platform presenting breathtaking 180-degree views over Halls Gap, Lake Bellfield, and the Wonderland and Mt William Ranges.

Sunrise at Boroka is a particularly stunning time to visit (a few freezing May mornings hindered our ability to get up before dawn), and is the best spot from which to watch as the hills and mountains turn from dark, shadowy figures into burning crimson and gold in the morning light. On a clear day you can see right across Western Victoria and beyond, the horizon just a tiny spec in the distance.

Reeds Lookout and The Balconies can both be accessed via the same carpark, which is located 13km from Halls Gap along Mount Victory Road. The view from Reeds Lookout hits you as soon as you step out of your vehicle, and the rolling peaks and troughs of the Victoria Valley, Serra Range, and Mt Difficult Range appear like an extension of the carpark itself. Wander 100m along the well-maintained and wheelchair-friendly path to the edge of the range for an even better look across the valley.

To reach The Balconies Lookout, you’ll need to hit the walking track for a relatively easy, two-kilometre trek through a quiet, almost eerie section of stringybark forest, to reap your rewards. It’s an epic payoff for what felt like a walk in the park compared to the MacKenzie hike, and you are greeted by more views of the far-reaching Victoria and Mt Difficult Ranges, and also Lake Wartook and a unique rock arrangement, which juts out dramatically from the side of the mountain and makes for a great photo op.

We arrived at The Balconies right on sunset, and no matter how many photographs I took, not a single one could do the scene justice, or manage to capture the rainbow of blues, greens, purples, and oranges that lit up the landscape in the fading light. It was a magical moment, that’s for sure, and one I won’t soon forget.

As a final test of our endurance and physical prowess, and to experience a true highlight of the Grampians National Park, my mum and I decided to tackle The Pinnacle.
For anyone unfamiliar with this arduous hike (practically a rite of passage for visitors to the Grampians), there are a couple of different routes of varying levels of difficulty. All end up at The Pinnacle, a large, jagged cliff that protrudes out of the mountain range and hangs rather perilously over Halls Gap.

The first route up to The Pinnacle begins on the main road of Halls Gap, at the Halls Gap Caravan Park. This 9.6km round trip is not for the faint-hearted, and requires some rock hopping, river crossing, and an overall high level of fitness.

Time constraints meant the longer route would have to wait for our next visit (phew!), and so we headed up to the Wonderland carpark to have a go at the 2.1km trek that would lead us to the top. The trail ascends through Australia’s very own ‘Grand Canyon’, a section named for its precariously perched rock formations, and past Bridal Veil Falls.

Despite one small stumble (me), and a slight ankle roll (mum), which we put down to slippery rocks and being mesmerized by the scenery, we made it to the top in about an hour, and again, the views were well worth the effort.

The rocky outcrop, barren except for a few weathered trees, gives way suddenly to the sweeping plains of Western Victoria. If you can muster the courage to walk out to the lookout, and the swirling, gale force winds don’t terrify you like they did me, you’ll find yourself on the very edge of the rockface, with Halls Gap directly below, nothing but a tiny miniature town from such a great height.

Spend a couple of days in the Grampians, and it’s not hard to fall in love with the region. Perhaps it’s the stunning vistas, with views that will take your breath away, the centuries-old mountains, valleys, and waterfalls, that remain untouched after all this time, or the promise of an adventure around every corner.

Whatever it was, it became clear to my mum and I that despite our weary bodies and a couple of souvenirs in the form of bruises, we’d definitely be back, and most likely sooner rather than later.