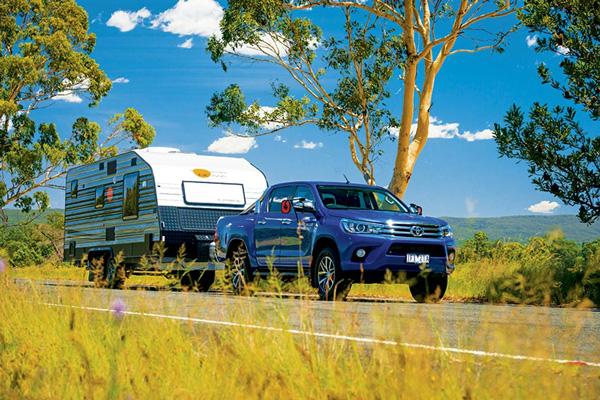 Toyota usually does a body and chassis renewal every eight years or so and waits until the mid-life update to slot in new powertrains. There are exceptions, and the 2016 HiLux is one of them. Not only are the body and chassis new, but so are the 2.4L and 2.8L turbodiesel engines and six-speed auto and manual transmissions.

It pays to read the fine print when choosing a HiLux because while they all have a big increase over the old model’s 2500kg maximum capacity, not all are the same.

Toyota recommends the use of a WDH when towing heavy loads. The HiLux didn’t have much ball load to contend with (186kg) so we did not use a WDH. Yet, once on the move, ride quality was compromised. That came as a surprise, as you’d think that adding weight to the rear might improve ride quality in a ute designed to carry a load.

Performance with the van behind was acceptable, but it’s clear even with the torque improvement over the old engine that the HiLux is not one of the performance front runners in the ute class. It struggled to maintain speed up our test hill. The engine, while very quiet at cruising speed when unladen, became quite noisy when hauling a van. With the revs sitting around 2500rpm on occasions, the engine noise was intrusive.

With its reluctance to rev much beyond 3700rpm, the HiLux’s 2.8L felt like a traditional diesel engine. Engine braking was very good.

The full test appears in Caravan World #547 March 2016. Subscribe today for the latest caravan reviews and news every month!