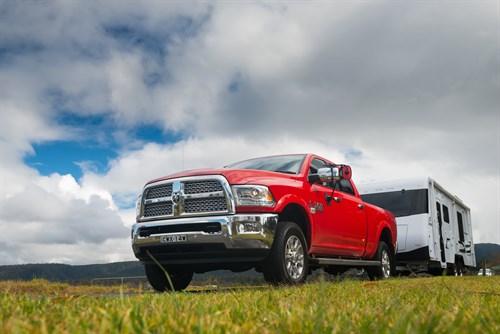 Americans love their utes. The bigger, the better. But for the Australian market, the RAM Laramie 2500 is sold by American Special Vehicles (ASV), a joint-venture between Ateco Automotive and Walkinshaw Automotive Group (WAG).

The RAM sits so tall that you’ll need the side steps and grab handles to climb aboard. And when it comes to towing, the RAM makes every other tow vehicle seem like a toy. It towed our 2900kg caravan like it wasn’t even there. Stability was never a concern and while there was some front-end pitching, it was barely noticeable.

Though it’s been on the market for about 10 years, the 200 Series LandCruiser is still one of the best tow vehicles that money can buy. It will shoulder just about any load and ask for more. Following a minor update, the twin-turbo Cruiser offers up 200kW of power, bucketloads of torque, and its good wheelbase and 2.6-tonne kerb weight contribute to the vehicle’s inherent stability.

Like the LandCruiser, the Disco has lots of kerb weight which, coupled with its big 3L SDV6 engine, make it one of the best, most cost-effective caravan haulers around. It is, however, starting to show its age, though in terms of technology, it remains up to date with its competitors.

This tow vehicle is comfortable and luxurious, and it is no slouch in the performance stakes, either, thanks to its twin-turbo diesel, which puts out 183kW of power and 600Nm of torque.

Land Rover doesn’t recommend the use of a weight distribution hitch with this vehicle, which is certainly something to keep in mind.

The biggest Mercedes-Benz SUV since 2006 has been the GL-Class and it is, in fact, one of the biggest SUVs money can buy. The first-generation GL-Class was replaced in 2012 by the new GL, which was 100kg lighter but still used a monocoque body instead of the familiar body-on-chassis construction used on vehicles like the LandCruiser 200.

The GL 350 BlueTEC Edition S is undoubtedly an expensive tow vehicle, but so are the alternatives. But while it is a big, expensive truck and feels it to drive in the city, the GL-Class shrinks around you on the open road and has the comfort and road manners to eat up the kilometres with ease. Towing a caravan behind simply doesn’t faze it and there are few other tow tugs on the market that could carry off a lap around Australia with such ease.

The Grand Cherokee is an exceptionally good vehicle, with a high degree of competence in all areas and can be bought with a lot of fruit in Overland form for not much cash. You can’t really argue with that.

The height-adjustable, all-independent air suspension absorbs bumps well, only being confounded by sharp bumps such as deep potholes. Handling is quite good, with minimal body roll and tenacious grip. The steering is sharp in response, but lacks feel.

The Grand Cherokee shoulders the burden of a caravan without complaint and the self-levelling air suspension makes hitching up easy.

The Grand Cherokee is very stable on the road with a van behind. The suspension does not feel quite as compliant as it does when there is no load, but it is very stable and predictable in its response to buffeting and road surface changes.

When Ford refreshed the Ranger with the PX MkII series, it incorporated a host of new technology features, from electric power-assisted steering to a special emergency assistance feature. But the Wildtrak Double Cab also gets the external bling that buyers would expect in a top-shelf ute, such as an aluminium hoop bar, roof rails, a cargo liner, 18in alloy wheels and more.

Steering is responsive to turn-in and direct at straight ahead and, while the lanky wheelbase and relatively basic suspension do no favours for cornering, the Ranger holds a chosen line surprisingly well. Ride quality actually has a bit of quality too, which comes as a surprise in a ute designed for heavy load-carrying.

The Everest is based on the Ranger ute, so it has a body-on-chassis design, live rear axle, 3.2L five-cylinder turbodiesel and six-speed auto. The key difference with the Everest (aside from the obvious body change) is that the rear axle is suspended on coils in place of the Ranger’s heavy-duty leafspring design, and the 4WD system is torque-on-demand rather than the part-time system in the Ranger.

With its abundant torque, heavy mass and promising dimensions, the Everest should be a great tow vehicle. In practice, it wasn’t as planted on the road with a van behind as we hoped when we tested it, but it acquitted itself well in terms of engine performance and fuel economy. Towing stability was perhaps affected by too little ball load, which could explain its inclination to sway a little.

In terms of body shape and styling, the Pajero is long in the tooth. It’s been many years indeed since the venerable Paj has come in for a serious update. But that doesn’t mean it lacks the fundamentals of a great tow vehicle.

It shoulders the load of a caravan extremely well, tackles hills with aplomb and maintaining power in reserve, though it suffers slightly from the dreaded turbo lag at low speed and revs.

It is prone to a little pitching up front but it’s certainly not dramatic – the use of a weight distribution hitch irons out this problem.

As many Pajero owners know, however, once hitched up, the tailgate doesn’t open far, as it fouls against the ball coupling. Swapping to a low profile coupling, such as the DO35, solves this issue.

The Pajero also has a restricted towball mass. When the total weight of the van exceeds 2500kg, the permissible towball download is reduced from 250kg to 180kg.

There’s no denying that the MU-X has a silly name, a slightly higher towing fuel consumption than expected, a soft suspension and some less than ideal interior trim. But the MU-X is still one of the best mid-size towing platforms available, with high towing capacity, good performance and interior comfort.

We were surprised by how well it took on the weight of a tandem-axle caravan with no hint of instability. We didn’t even use load levellers!

Engine braking is very good, while performance up most hills is exemplary. Steep inclines only marginally take the edge off performance.

The soft suspension can become a problem on undulating roads; the shock absorbers feel as though they can’t keep up. An aftermarket suspension kit would be the first thing on the shopping list if you were to tour with the MU-X

The Prado is one of the very few 4WD seven-seater wagons remaining that did not start out as a ute, but with the introduction of a new 2.8L engine, does it still make a good tow tug?

The Prado is one of the smoothest-riding 4WD wagons on the market. Steering is very light and doesn’t have much feel, but it is direct. The Prado’s chassis is not the 4WD-world’s most dynamic; it preferred lashings of understeer when pushed.

The greatest disappointment with the Prado is not so much how it tows, but its lack of towing capacity. With the raft of utes and ute-based SUVs now able to pull 3000kg or more behind them, the Prado’s 2500kg seems a light-on. Its towing performance is blunted a little going up a hill, but engine braking is good. Stability is not obviously affected by adding a caravan behind and the standard side mirrors are large enough that with some vans you would be able to see behind them without towing mirrors.